What Is Wrong With This Steak And Baked Potato Picture

Eye appeal of a beautiful photo aside... 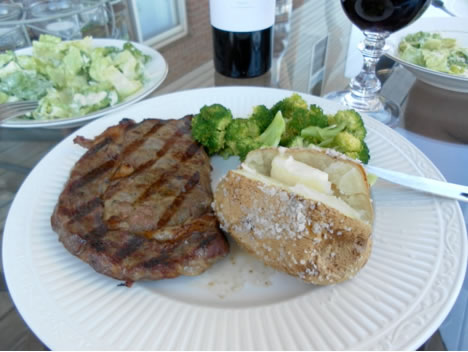 What is wrong with the baked potato in the picture is that it was obviously sliced with a knife before going out of the kitchen, or when presented at the table.

A knife? Yes. The ideal utensil to use when opening a properly baked Idaho® Russet Burbank potato is a fork.

The knife, when it is used to cut a slit into a freshly baked potato will glaze the potato cells, causing them to seal up. This perfectly innocent act of helping to create a place for the butter and sour cream to nest inside actually ends up making a guest or customer use even more dairy.

The proper way (can’t believe I am such a potato snob), is to use the fork tines to form a cross. Down the length of the potato make a line with the tines, and then down the width of the potato make two separate horizontal lines with the fork tines. Grab the potato at both ends with your hands and push together, blossoming the potato. Sometimes people call this “bursting” the potato open to let the steam from baking escape. You’ll end up with a nice dry fluffy texture that will allow the butter and sour cream to penetrate the interior of the potato. Try this method and the old knife method side by side and I personally guarantee that you will find the “fork” style potato to be tastier.