Q & A: Who Invented the Giant Baked Potato?

Who invented the giant baked potato that you see on steak chain menus such as Del Frisco’s, Morton’s, Ruth Chris, Capital Grille, etc?

Like all stories that become legends, the real truth many never be known. What we do know is that, Toffenetti’s, one of the earliest restaurant chains, with locations in Chicago and in New York City, certainly had a hand in making the humongous baked Idaho potato famous, and forever identifying our state with the one pound monster potato. Here is what was written about it in The Aristocrat in Burlap, a book about the history of the Idaho potato industry. One of the great boosters for the Idaho baking potato was a Chicago restaurant owner named Dario Toffenetti. Toffenetti stated that he got started buying and serving Idaho potatoes because of a particular lot that was in storage in Chicago that nobody wanted to buy. This lot of potatoes proved to be one that had been shipped by Joe Marshall to Chicago, and they were all of exceptionally large size. It was an experimental shipment in which all of the smaller tubers had been removed, and the lot probably consisted of potatoes weighing 12 ounces and up. Toffenetti stated that he went to the warehouse where the potatoes were being stored and they were huge and beautiful. The idea of serving these large potatoes caught his imagination, and he bought the entire shipment. Toffenetti, at that time, was the owner and operator of several restaurants in Chicago & New York, and he featured these big Idaho bakers in his restaurants. The reaction of his customers was very gratifying to the Italian restaurant operator, and he reported in his charming Italian accent, "And the customers say to me, 'Dario, you serve too much food. I can't eat it all.'" Toffenetti was shrewd enough to realize that a large baked potato on a plate was an inexpensive way to give the customer the impression of extremely generous portions. In the economically depressed days of the 1930’s, everyone was looking for an exceptional value, and the reputation of Toffenetti's generosity was a great promotional device for him. Toffenetti displayed large Idaho bakers in the windows of his restaurant and made several trips to Idaho, where he became acquainted with leaders in the Idaho industry and formed many warm friendships. Toffenetti and Joe Marshall were fast friends and were known to always get together when Marshall was in Chicago or Toffenetti visited Idaho. 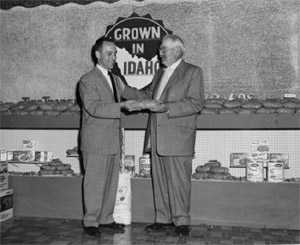 Dario Toffenetti (left) and Idaho Grower/ past Commissioner Joe Marshall at the 1962 National Restaurant Show in Chicago in 1962. 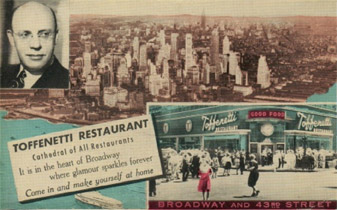 The postcard above shows the NYC Toffenetti restaurant at Broadway and 43rd Street with the Neon sign “Good Food” posted over the entrance. At its heyday you could sit with 3000 other patrons for dinner and would be hard pressed to spend more than $3.95, including a drink and dessert. Giant Idaho Baked potatoes sold for a quarter, complete with butter and sour cream.