With 843 posts, chances are there's already an answer to your question. Please try searching below before submitting a question to Dr. Potato. Use multiple words to help narrow down the results. For example, search for "potatoes" and "group" if looking for an answer on cooking potatoes for large groups.

Recently I had a group of operators from Korea asked me about potato trends and also if I had seen anything unique that they might be able to take back to their country and try on customers for late night or breakfast/brunch.

Here are the potato trends I divulged:

Hash brown cups:  Using mini muffin tins, the dehydrated, frozen, or fresh hash browns are mixed with whipped raw egg or egg whites and combined with red peppers or herbs and pre-baked.  These are then filled with various toppings from smoked salmon and crème fraiche to an egg, ham, or bacon mixture and baked off.

Potato cakes:  Whether it’s a new version of a latke, or potato cakes formed from hash browns or left over mashed potatoes, these are served next to a protein such as beef short ribs or under a fish such as halibut or barramundi.

Upscale Tots:  Made from scratch, the fillings include chorizo and cheddar cheese, crab or lobster, pungent cheeses, etc. and slightly oversized from the traditional tater tot.  By the way, have you had the Cheesy Tots from Burger King? They taste great!

Recipes:Here are two of my absolute favorite recipes: 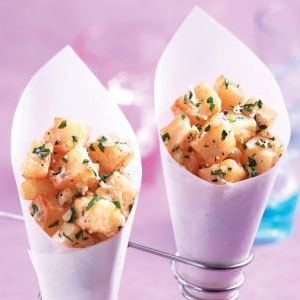 The Parmesan Fried Idaho® Potatoes are a great late night appetizer for the bar and what is great about them is that you can make the cubes from any size Idaho Russet potato.  The skin can be peeled or left on.  The cubes can be blanched ahead of time so that they can be quickly finish fried to order.  The herbs can be swapped out for other herbs (sage, rosemary) or spices (curry, Spanish paprika) and so can the cheeses (gruyere, blue cheese).  The potato cubes are bite size and I guarantee that they are hard to resist. Recipe: Parmesan Fried Idaho® Potatoes

The Idaho® Potato Volcano is a totally unique entrée to serve with fresh fruit for a breakfast/brunch.  It has a filling of pre-made scalloped potatoes along with many other exciting ingredients outlined in the recipe below.  This dish was served at the Sun Valley Resort in Idaho last month.  Credit goes to the Momofuko Milk Bar in NYC for the original recipe:  http://newyork.seriouseats.com/2009/05/momofuku-milk-bar-making-of-the-volcano-nyc-east-village.htmlThe version Sun Valley chefs served to guests also included a Mornay sauce under the volcano and a Roasted Red Pepper Coulis sauce to create the allusion of hot molten fire and rock spewing out of the top of the volcano.  Momofuko used bacon as a filling, the Sun Valley version used shredded beef, but you could also substitute shredded pork with a soft Mexican cheese or make an Italian version with Mozzarella, Monterey Jack and aged Cheddar and use precooked pepperoni or salami as the meat. Recipe: Idaho® Potato Volcano