What makes a good potato for a Poutine? Can the original recipe be modified with different ingredients?

Let’s address your first question as a Poutine is much like the balance of meats and vegetables and cheese and sauce on a wonderful crust. That crust or “pie” is often the subject of focus groups with the question asked “what is your favorite part of the pizza” and in the USA the typical response might include “you can never have enough cheese”  a chef  or pizza master will tell you that it’s finding the right balance that makes all the rest taste great. The sides of opinion will also form around the best crust. It can be crackery thin or really thick, but it’s got to be strong enough to hold the toppings and provide either a nice crunch or delicious softness for the cheese or sauce to just slightly absorb the moisture.

I never met a “French fry” I didn’t like, but I do have a favorite style. Just like the ubiquitous perfect hot McDonald’s fry, the ingredients are important and the execution and consistency will contribute all in a combination that when done right is absolutely amazing.

Just recently in Chicago a group of us tracked down a restaurant that had landed on the coveted list of a reviewers places to visit to taste one of their menu items… Poutine. You know, the cheese curds, brown gravy slathered over French fries dish that of loaded fries that can make a foodie swoon over the first bite.

This version (pictured below) had a unique twist and topping. Braised beef brisket made for a tasty meal aspect to the appetizer, shredded and nicely marinated in its juices. A fun twist was a couple of homemade dill pickle slices on the top, giving a little tartness to the first bite. No cheese curds in this version, but a nice flavor contrast to the meat and an added creaminess.  Ah, but then the fries… A shoestring cut (probably not something I would smother in liquid as it absorbs away all the potato flavor) instead of a thicker steak cut or at least something that could retain a semi fluffy inside with the crispy outside from frying. And, while I too love local and in season, the local farms round potatoes were probably never meant to take on such a mass of liquid. Probably not enough solids, this variety of potato (much like trying to get an acceptable fry out of a waxy red potato) just was overwhelmed and out of balance. The pizza analogy… too much topping and too wet for the crust to be able to absorb.

A Russet Burbank variety from Idaho, while not local, would make such a difference! So, can you use different ingredients? Yes, but be aware of how the potato is going to be used and finally, take my advice and experiment with the toppings and gravy but not the spuds. 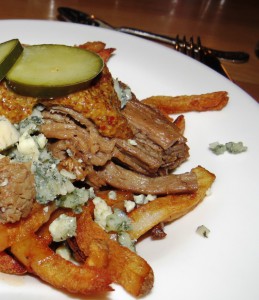