With 871 posts, chances are there's already an answer to your question. Please try searching below before submitting a question to Dr. Potato. Use multiple words to help narrow down the results. For example, search for "potatoes" and "group" if looking for an answer on cooking potatoes for large groups.

Is There One Best Way To Make Fresh Cut Fries For My Restaurant?

I see a lot of tips on making fresh cut fries on the internet and some seem to conflict each other. Is there one best way to be successful at serving my customers a fresh fry? 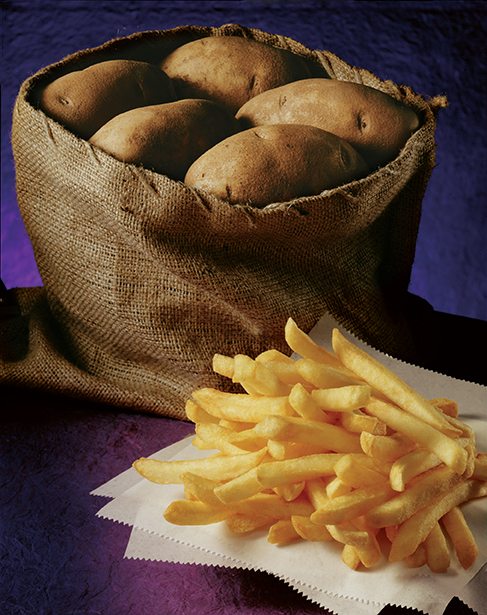 Many of the tips for home cooks are based on using the equipment easily available from a deep pan on a stove to a small table top fryer such as a Fry Daddy brand. And while Yukon Gold variety potatoes can be fried to a beautiful yellow gold color and crispness, according to more than one consumer food editor or tester, there are many many yellow fresh varieties and those used for chipping potatoes are probably a better choice. Yes, you can fry a yellow flesh potato such as a Yukon Gold, but will it be available from the same source or state year round? Will it cost more than a russet variety? Consumer food editors lately seem to have a love of mentioning this variety for everything from fries to mashed to salads. However, in the United States the variety that has been preferred since before there was a frozen fry industry is the Russet Burbank, still about 50% of all of Idaho's potato production.

One of the more unique methods going around is to start the cut potatoes in cold water or oil. This, of course does not lend itself to quantity foodservice when a large volume of orders can come in at lunch time. And, yes you can cut the potatoes into a bucket of water, drain and put directly into a fryer without a blanch or pre-fry step. However, the savings in time is misplaced in my opinion. Always, always blanch the fries and let them cool and then fry to order. This partially cooks speeds up the time needed for finish frying.

I recently had the opportunity to work side by side with a chef in a test kitchen of a large chain to do some comparisons of frying fresh potatoes versus frozen fries. My first impression... it is really hard to duplicate the consistency of a frozen fry. The frozen shoestrings when fried came out light in color, crisp and delicious when hot. The chef wanted a little more though. He wanted a signature item, not easily duplicated by his competition. He wanted to have something that might make a potential customer drive a little further and stop at his chains locations because of a distinctive potato flavor, a skin on homemade appearance and a golden brownish orange darker color that immediately shouted out "oh my gosh, these are fresh fries."

The first issue that came up was the source of the potatoes, something you often never even think about with frozen fries. Manufacturers can bring in fresh potatoes from the field or in storage, test them for solids and sugar and make adjustments in the fry times and temps for each batch. They end up with very similar tasting frozen fries and often sort out most of the defects or dark spots too. That's not practical in each location when dealing with fresh potatoes coming in your unit in a carton (No.1) or a bag (usually a paper bag No. 2). So each order or batch may be a little different than the last or vary throughout the year.

Coming back to the potatoes... The potatoes were stored in the kitchen. The temperature for fresh fry storage guidelines at a distributor or produce specialist should be around 45 to 48 degrees F. Colder than 40 degrees and the potatoes will begin to convert starch to sugar, bad for caramelizing the fries without being completely cooked. In a kitchen they could become quite warm, so try to store away from stove, fryers or other equipment that is giving off heat. Too warm of storage and the potatoes will start to have a wrinkled skin or sprout prematurely. Ideal is about 55 degrees F. Remember, there are ideal circumstances and reality, so do the best you can, by setting aside a good cool dark place to store the potatoes.

The varieties he had on hand that were shipped for sampling included a 70 count russet, a No. 2 Russet Burbank from Idaho, ten ounce and above, a No. 2 Idaho® Russet Norkotah 6 ounce and above and a box of No.1 80 count Russet Burbank’s from Idaho. Note, the time of year was early season so Russet Norkotah’s were about two months old. Russet Burbank’s were just coming on board (first shipment to the distributor). As it ended up, given the extra-large No. 2 Russet Burbank’s, many of which had to be cut in half to fit the fry cutter on the wall and the trimming. It was decided to stick with either a No. 1 (which can be similar in price some seasons but yield a little better) or a No. 2 6 ounce and above. By the way, a 70 count is anywhere from 67-74 potatoes in a carton, ranging in size from a low of 9 ounces to 15 ounces with most around 11-12 ounces.

Each group of potatoes were washed, scrubbed with a brush to remove any dirt or sand especially around the shallow eyes that can trap or hold onto dirt. Then, placed in a sink with water covering them. Potatoes were placed one at a time in a cutter mounted to the wall (find a stud to attach or else you can pull it right off the wall). Next they were placed in an insert with holes to drain water off the potatoes and this was placed in a deep 4 inch metal insert where we rinsed the potatoes till the water ran clean, removing any excess starch or sugar. We then added a small quantity of white wine vinegar to keep the potatoes from turning gray or pink after cutting. You won't taste the vinegar when diluted in a 3-4 inch insert of cut slices in water, a ratio of about a gallon of water to a tablespoon of acidity. Concentrated lemon juice works well too.

The French fry cutter sliding mechanism can get sticky from extra accumulations of potato skin or starch, so rinse off frequently as each carton or bag of potatoes is cut. Don't scrimp on the French fry cutter. Anything under $100 isn't going to work very well. My personal favorite is a King Kutter, about $300. It glides easily without sudden jerking. Nemco is another good brand. Designate someone with good upper body strength to do the potato cutting, it is not an easy job.

Next up, is to get the potato slices dry of excess water. A giant salad spinner works really well for this, the two major brands sold in foodservice are orange or green. Both are large enough to hold a tray of potato slices. Add to the spinner. Spin and you'll be amazed in a few turns how much water comes off the potatoes. The potato slices then need to go into the fryer pretty quickly after drained of any excess moisture so they don't discolor when exposed to air. Potato strips turning gray or pink are indicative of waiting too long before frying.

The Idaho Potato Commission has a chart for blanching and finish frying by the size cut. Use it as a guideline. For example, with a half full single basket we were able to have an acceptable fry strip (bends before it breaks, still light in color) in 1 1/2 minutes instead of the recommended 1 3/4 minutes to 2 minutes at 350 degrees F for the Russet Burbank's. I have found that the Idaho® Russet Norkotah may actually work well as a French fry if you drop the blanching temperature by 15 to 25 degrees or more and just cook a little longer. Try 300 degrees to start with, but know you could drop it back to 265 and just use a timer to determine when to pull from the fryer. On average, the Norkotah may have slightly less solids or starch than a Burbank in any given year. Experiment to find what works for you.

With any variety, it helps to get the hot oil circulating by shaking the fries half way thru the frying. Bring the baskets out of the oil, let drain a few seconds and then place into another metal insert that has a grid or screen to raise the fries off the bottom, as this allows any excess oil to drop off the strips. Let the fry strips cool to room temperature before placing in the walk in or reach in. There still is steam coming off the fries when first removed, so don't put a lid on the container right away or else the condensation will come right back on top of the fry strips and cause them to be soggy.

The main reason to cool the fries now is to get the moisture out of the fries as best as possible and to allow the potato cells to close up so the next finish fry won't absorb as much oil and will crisp up faster. This process is called retrogratiation. Remember, a raw russet potato is about 80% water. This first blanching or pre-fry is meant to get a lot of that water out of the potato.You can cool the potatoes for about an hour in the walk-in and then be ready to finish fry. In fact, you can also store them in the walk-in for 12-24 hours this way too. This actually allows the labor it takes to fry fresh to be allocated to non-busy times to cut and blanch.

Now on to the fun part... We took the partially cooked fries out of the refrigeration, scooped up some into a fry basket (again, half full unless you have a super new fryer with fast recovery times) plunged the potato strips into 350 degree hot oil (it really is up to you what to use, from peanut oil to olive oil to vegetable oil to zero trans-fat to animal fat) and within a minute and a half to 2 and a half minutes we had crispy fries. Again, in the middle of the cooking process give the fries a shake to re-distribute the hot oil throughout the potato strips. Drain over the fryer a few seconds, then into a pan under warming lights. Salt away from the fryer as any that gets into the oil will break it down prematurely. Don't bag the fries till an order comes up. Success! The house cut French fries had nice crispiness, they held up well for several minutes tasting good even after ten minutes on the line.

Another note: Lately I have seen several chains place the larger size fries in a cup without any venting. The fries on top are delicious and crisp, those inside the cup can turn soggy or wet when there is no method for the steam to escape. On this particular day, given the cost comparison being close between a No. 1 and a No. 2 the best solution for the chef was to use a No. 1 Russet Burbank from Idaho. We spent less time trimming than with a No. 2. The No. 2 had to be cut up, any clipped ends, defects or soft spots. The No. 1 produced exactly what the Dr. ordered, a signature fresh cut fry that customers will rave about. 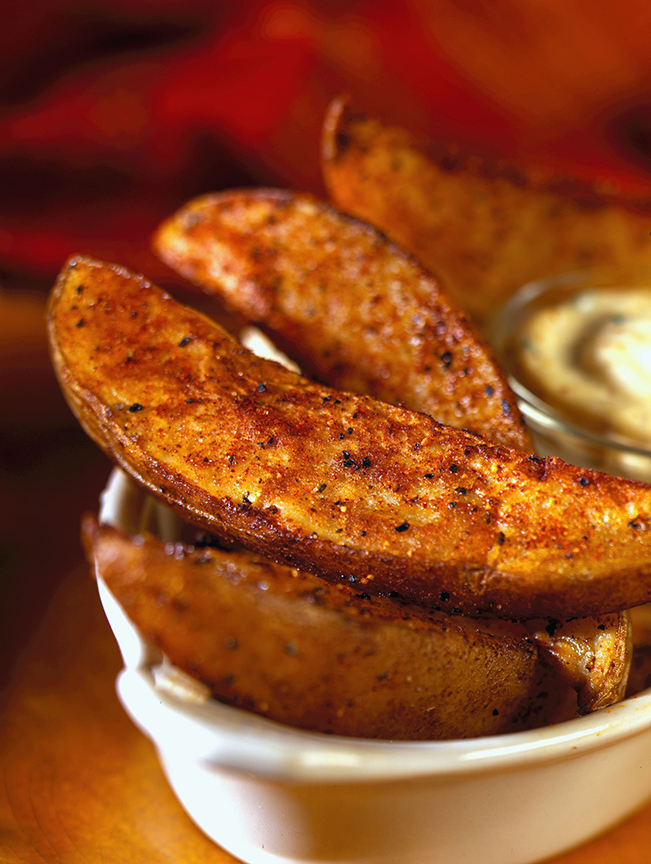