How to Make a Great Baked Potato at Home

How do you make a baked potato at home that tastes as well as those you get from your favorite restaurant? My wife and I have tried everything…bake time, oven temp, size of potato etc. They still suck big time! What are we doing wrong? 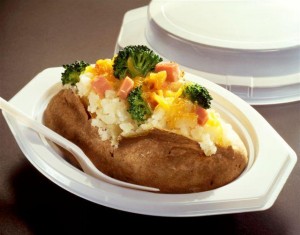 Most of the upscale steak houses such as Morton’s or Smith & Wollensky use an Idaho® Russet Burbank variety potato. They typically choose a 40 or 50 count potato, which weighs about a pound each. Budget steakhouses such as Sizzler or Golden Corral typically use a slightly smaller potato, such as a 70 count or 80 count, the same size you’ll find at most grocery stores in the loose potato displays. Since they use their ovens for lots of different food cooking applications the chances are that they are cooking the potatoes longer and hotter than you do at home. The potato is done when the internal temperature is 210°F or a minimum of 185°F. 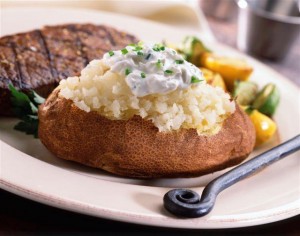 If you want a little moister baked russet potato choose the Russet Norkotah. This is the variety commonly sold in grocery stores. Personally I find that this variety needs to be baked a little longer, typically ten more minutes.

Of course, I am assuming that you looked for the “Grown in Idaho®” seal on the nearby bagged russets and found that Idaho is one of the few states (in fact, the first) to label the variety right on the bag or plastic white enclosure tag, called a quick lock. Look for the words Russet Norkotah or Russet Burbank or other Idaho variety names such as Ranger, Umatilla, Alturas, etc. If you find a variety you like, ask the produce buyer to continue to stock it.

Don’t store the potatoes in the refrigerator; the natural starches will convert to sugar and the potato will taste sweet when baked. Store in a cool dark place such as your pantry or where you store your dry cereals.

Don’t wrap the potato in foil, this just steams the potato and makes the skin wet. Yes, some restaurants do this but primarily they are trying to hold the potatoes longer and dress them up. The brown skin may not be the prettiest vegetable but it does not improve the flavor when the 80% or so water content is trapped inside a wrapper.

At home, I just set the oven at 400°F and then wash off the potatoes using a brush to get any dirt or sand out of the deep set eyes. I use a fork to pierce the potato on both sides to let steam escape and then I place the potatoes (with spacing around each) in the oven right on the racks so they will cook evenly and faster than if bunched together or on a cold metal tray. Use one hour as your guideline, some potatoes may bake in a little less time but with various sizes and different oven temps (have you had your oven checked to see if it is the same temp as the dial? The gas or electric service usually will do this and calibrate the oven for free). 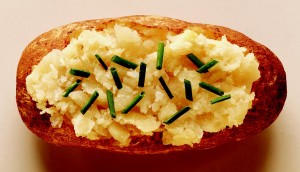 When a potato is done baking you can usually start to smell the aroma leaking out of the oven or vent. Pull one of the potatoes and poke it with a fork till you don’t see the tines of the fork. Just like baking a cake, the fork should come out nearly clean once the potato is thoroughly baked. Or, use a meat thermometer and check the temp to see if you are above 185°F. If you need to hold a potato until dinner is ready, turn off the oven but keep the door closed and the heat will stay in for another 10-15 minutes. That’s about how long it takes for me to start a steak on the BBQ, 8 minutes on the first side and six on the second if the propane gas has already heated the BBQ grill to 300-400°F and is turned on high.

Don’t cut a baked potato with a knife, it just compresses the starch cells and when the interior glazes over the butter or sour cream will make it soggy. I open the potato with a fork, cutting a cross into the top of the potato. Then I push in both ends of the potato and it will blossom open, just like at your favorite steak house. If the potato is still moist inside I pop it into the micro wave for 30-45 seconds, pull it out and put on salt, pepper, sour cream or cottage cheese or low fat yogurt. For a healthier option (which I love for a lunch entree) I put fresh salsa on the potato with no dairy products. It tastes great.

Give some of these tips a try and tell us what you think… did we come closer to your favorite restaurant’s baked potato?