High volume budget steak houses seem to have put together a lot of combo meal deals lately. How can they afford to do this? 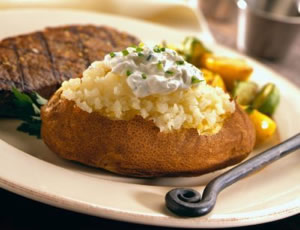 Yes, it’s true. Bundled meals are really popular in a slow economy as the guest can pre-determine the approximated cost to go out to dinner instead of shopping for ingredients at a grocery store and trying to replicate the same meal for the same price. For example, Texas Steakhouse & Saloon recently promoted its 2 for $20 deal, offering two 6-ounce mesquite-grilled rib-eye steaks. The deal also includes two Side Kicks and a Crispy Onion Blossom Petal.  Their sidekicks include several economical straight forward potato based sides.  The sides included two salad choices, broccoli and the following potato selections: Red Bliss Potatoes, Creamy Mashed Potatoes, Seasoned Fried Baked Potatoes, Seasoned Fries, Baked Potato with Butter and Sour Cream. They do offer an up-charge of an extra dollar per potato side when easy to add items such as cheese or bacon are requested. Side Kicks on the regular menu add a $2 up charge and even at this low price this can be very profitable.

Actual costs for an 80 count Idaho® potato at $20 per 50 pound carton still are only 25 cents each; at $25 a carton it is only 31 cents. To obtain your own FREE cost per serving slide chart, you can order one by sending your mailing address to ipc@potato.idaho.gov