With 801 posts, chances are there's already an answer to your question. Please try searching below before submitting a question to Dr. Potato. Use multiple words to help narrow down the results. For example, search for "potatoes" and "group" if looking for an answer on cooking potatoes for large groups.

Build Your Own Everything With Baked potatoes

I was in an interesting pizza restaurant the other day, 800 Degrees in Westwood California and I noticed that they offered three basic pies and then a bunch of upscale toppings, each priced at $1. This intrigues me. Have you ever seen a QSR or fast food place do this with Idaho baked potatoes?

There used to be a chain called One Potato Two along with several others that were Mall based fast food concepts where they offered a combination of toppings, each with a clever name. In Oklahoma City Bites they had several topped potato options including a chicken salsa with cheese sauce. Limiting what a customer can buy controlled food costs. It also was easier to ring up as cash registers could only handle so many permutations.

The new pizza concepts are built on instant customization. Instead of tossing on a few sliced olives, if a customer wants olives on their pizza you can order a tapenade or a Kalamata olive topping (and add a buck). Instead of being limited to Mozzarella cheese for a topping, the guest can add Brie or Asiago and again the topping costs adds to the check average. Substitute the ground pork sausage typically scattered across the crust with marinated shredded pork.

Why not do the same with a baked potato? The price of large 50 count one pound average potatoes is typically somewhere between 25 cents and 50 cents. Offer a standard baker with butter and sour cream but rather than precooked bacon bits (does anyone really love that product) offer to top with thick chunks of maple roasted pork belly for a dollar more.

Jason’s Deli out of Texas and McAllister’s Deli make giant baked spuds with Meatloaf and gravy or roasted vegetables and can charge $6 to $8 dollars for them. The potato is the least expensive, but the most filling part of the meal choice. Put it to work for you to help lower overall food costs. 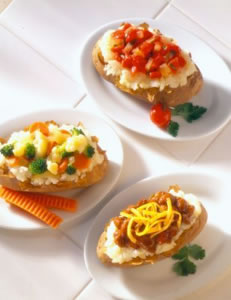