I’ve found that when I make fresh-cut fries, Russet Burbanks seem to be the only potatoes that crisp up nicely. I’ve learned my lesson when I’ve used other Russets—the fries are extra soggy and my customers complain about them. Where can I find the famous Idaho® Russet Burbanks? Sometimes my foodservice distributor says they are out usually in July or August. 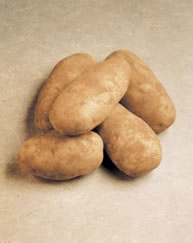 The Russet Burbank takes longer to mature, so this variety is not always available in the late summer or early fall from the major states that grow them. Among these three states—Idaho, Washington, and Wisconsin—the largest volume of Russet Burbanks comes out of Idaho. This variety is also preferred by processors for their French fries, so you are competing with them when supplies are tight. However, we expect an ample amount of Burbanks this coming harvest, and typically they are shipped in quantity beginning in late September. Many operators actually prefer “old crop,” which sometimes has a little drier profile after being stored for almost a year. We also anticipate that old crop will carry through this season, so no potato gap is anticipated. Here is a chart by percentage of Russet Burbanks grown in Idaho, as they make up nearly 58% of our production. Keep in mind that Idaho harvests about 11 to 12 billion pounds of potatoes each year, nearly double that of Washington, our closest competitor.