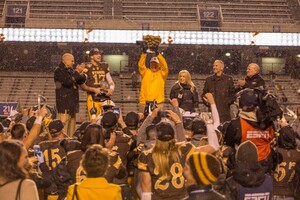 EAGLE, Idaho, May 9, 2018 – The top teams from the Mountain West and Mid-American Conferences will go head to head on Friday, Dec. 21st at the 22nd Annual Famous Idaho® Potato Bowl (FIPB). Kickoff is 2:00 p.m. MST/4:00 p.m. EST on the blue turf at Boise State University’s Albertsons Stadium; it will air live on ESPN. 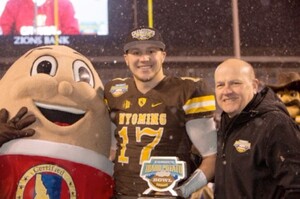 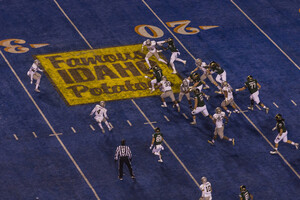 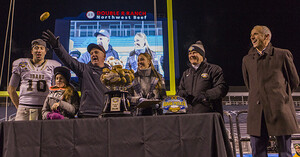 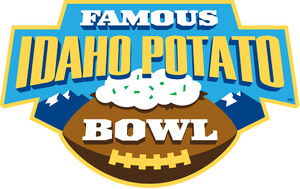 Boise, Idaho (December 29, 2015) - The Utah State University Aggies (Mountain West Conference) were the predicted victors of the Famous Idaho® Potato Bowl, but the Akron Zips (Mid-American Conference) played strong and hard to win their first bowl game ever on the blue turf of Albertsons Stadium in Boise, Idaho. The cold-weather game aired live on ESPN and ESPN Radio on Tuesday, December 22nd with millions of fans tuning in from across the country. 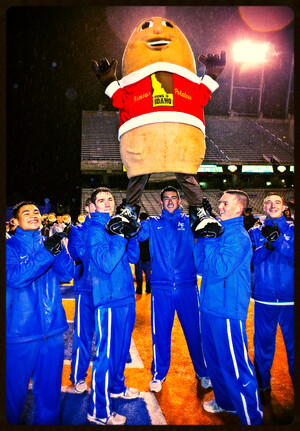 The Air Force Academy (Mountain West Conference) went head-to-head with Western Michigan University (Mid-American Conference) on Saturday, December 20th in the Famous Idaho® Potato Bowl on the blue turf in Albertson’s Stadium in Boise, Idaho. The game aired live on ESPN and ESPN Radio during prime viewing time and was seen by millions of fans. 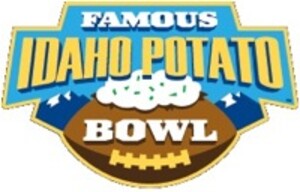 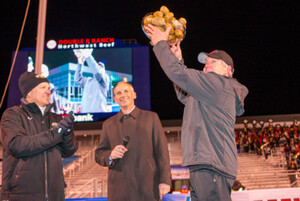 Dec 31, 2013
Famous Idaho Potato Bowl Kicked Off its Third Consecutive Year with a Match-up Between the San Diego State Aztecs and Buffalo Bulls

The San Diego State Aztecs went up against the Buffalo Bulls to bring home the Famous Idaho® Potato Bowl ”bowl” on Saturday, December 21 in a cold-weather showdown on the blue turf in Boise, Idaho. With attendance topping 28,000, the game, now owned by ESPN, was telecast live during prime viewing time and enjoyed by more than two million fans. 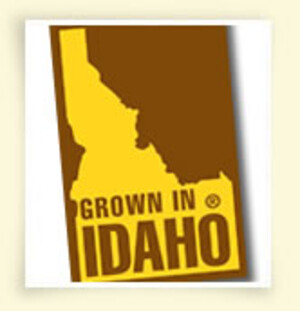 The Utah State University Aggies have earned a second chance to bring home the Famous Idaho® Potato Bowl trophy. On Saturday, December 15th, the Aggies will take on the University of Toledo Rockets on the blue turf of Bronco Stadium in Boise, Idaho. The Idaho Potato Commission (IPC) is the sponsor of this cold-weather showdown, which has a history of dramatic finishes.

This year, champions from the Western Athletic and Mid-American Conferences will go helmet-to-helmet on Saturday, Dec. 15, 2012 at 2:30 p.m. MST in hope of returning home with the Famous Idaho® Potato Bowl trophy. The game will be the second of the bowl season and televised nationally on ESPN.