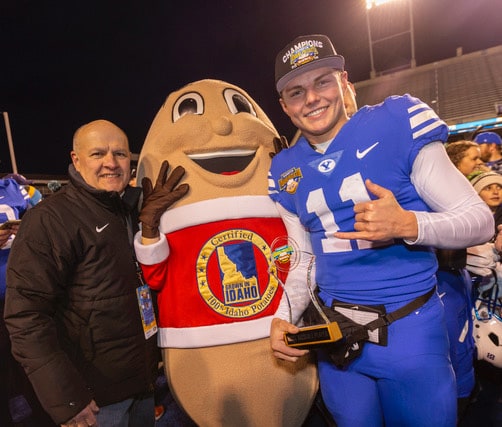 Eagle, Idaho, December 27, 2018 – Freshman BYU quarterback Zach Wilson threw a perfect game against the Western Michigan Broncos on the blue turf at Albertsons Stadium during the 22nd annual Famous Idaho® Potato Bowl (FIPB). Wilson completed all 18 passes totaling 317 yards and threw four touchdowns setting a new single-game BYU record for completions. The BYU Cougars defeated the Western Michigan Broncos from the Mid-American Conference 49-18 in the country’s premier cold-weather college bowl game with close to 20,000 folks in the stands and two million fans around the country watching it live on ESPN.

“For more than two decades college football teams have been traveling to Boise to play their hearts out at the Famous Idaho® Potato Bowl, which is for many players, one of the biggest events of their lives. The Idaho Potato Commission is extremely proud to host these athletes, their families and friends, cheerleaders and band members to help create an unforgettable experience for everyone,” explained Frank Muir, President & CEO, Idaho Potato Commission (IPC). “In my opinion the Famous Idaho® Potato Bowl is one of the most exciting of all college bowl football games. Every year, long-standing records are broken and talented young men are recruited to the NFL to become all-star players. It’s unpredictable, it’s exciting, it’s fun, and it represents what college athleticism is all about.”

And, this is evident by the NFL players who support the FIPB through their social media pages. This year, five players posted very creative pictures and/or videos on their Instagram and Twitter pages rooting for their alma maters with a shout out to Idaho® potatoes.

Additionally, Josh Allen who played for Wyoming in the 2017 FIPB and is now quarterback for the Buffalo Bills, posted a picture on Instagram and Twitter of himself receiving the MVP award last year.

The game also provides an opportunity to promote some of the IPC’s other important programs:

Additionally, the IPC makes sure that everyone who watches the game either in Boise or on television knows who the naming sponsor is, and is encouraged to look for the famous “Grown in Idaho®” seal.