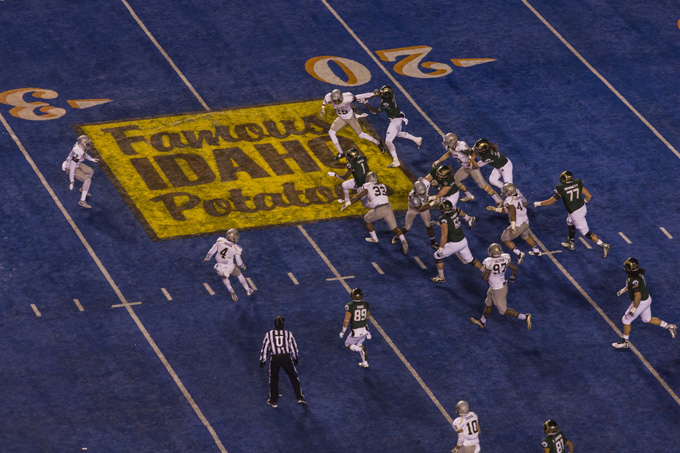 In its seventh year as the naming sponsor of the premier cold-weather college football bowl game, the Idaho Potato Commission (IPC) is looking forward to another exciting matchup between the Mountain West (MW) and Mid-American (MAC) Conferences. Last year, in the highest scoring bowl game of the season and the third highest scoring game in bowl history, the University of Idaho Vandals defeated the Colorado State Rams (61-50). Close to 25,000 die-hard fans braved the cold weather to cheer on the teams, while 1.1 million viewers (an increase of 6% over 2015) watched the game indoors on ESPN. This will be the MW’s fifth straight appearance in the bowl’s history, while the MAC will look to secure a spot for the eighth time in nine years.

“The Famous Idaho® Potato Bowl has proven to be an extremely effective sponsorship allowing
the entire Idaho® potato industry to get involved and support Idaho’s most important
agricultural crop, which generates more than $4.5 billion in annual revenue and employs more than 30,000 people,” explained Frank Muir, President & CEO, IPC. “With the excellent timeslot and the myriad of family activities scheduled to take place, including Simplot’s French Fry Feed, we’re confident attendance and viewership of the game will be higher than ever.”

Friday’s game will be one of two matchups that afternoon with the Bahamas Bowl kicking off earlier in the day at 12:30 p.m. MST.

The Famous Idaho® Potato Bowl is one of 13 owned and operated bowl games by ESPN Events,
a division of ESPN.