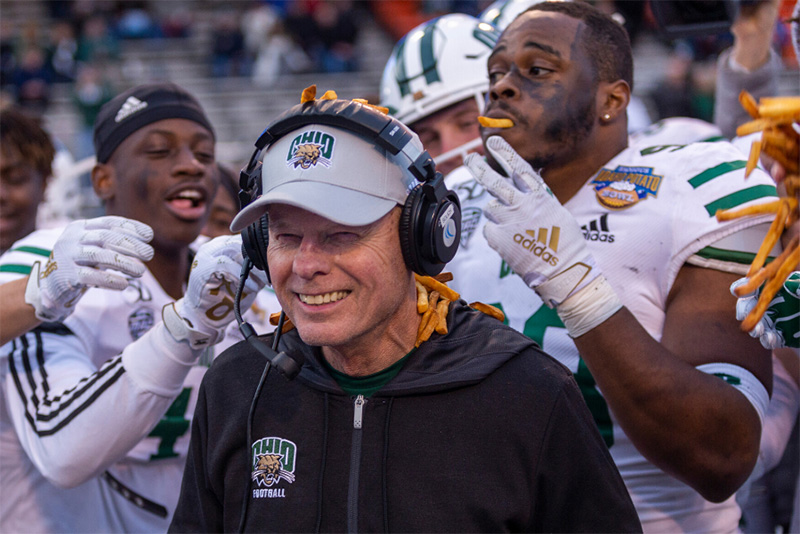 The Bobcats head coach Frank Solich gets doused with french fries, and the players enjoy a few too, after winning the Famous Idaho® Potato Bowl

“Every year the Famous Idaho® Potato Bowl generates more buzz than the previous year. Whether it’s the records set the during the game, the support of the outstanding NFL athletes who played in the bowl game while in college, or the crazy antics of the Idaho Potato Commission’s mascot, Spuddy Buddy, folks want to tune in and be a part of the hype,” explained Frank Muir, President & CEO, Idaho Potato Commission (IPC). “Recognizing the popularity of the bowl game, this year, for the first time, Boise State University allowed ESPN to replace its logo at midfield with the iconic Famous Idaho® Potato Bowl logo.”

For 23 years the FIPB has provided an opportunity for athletes to play their hearts out in front of a national audience, and the players never disappoint. Ohio quarterback Nathan Rourke, FIPB MVP, completed 9 of 17 passes for 144 yards, rushed 87 yards and rushed for one touchdown, tying the school career record of 49 touchdowns. Had he rushed for just one more touchdown he could have joined the elite group of college quarterbacks who have thrown for 50 touchdowns and rushed for 50 touchdowns. He came into the bowl game having already thrown 60 touchdown passes and rushed for 48 touchdowns. This elite group includes Tim Tebow, Lamar Jackson and Colin Kaepernick, who played in the FIPB for Nevada (when it was called the Humanitarian Bowl). This year three NFL players supported their alma maters by posting about the game on their Twitter and Instagram pages and giving a shout out to Idaho® potatoes.

The game also provides a unique opportunity to promote the IPC’s other important programs.

Additionally, as naming sponsor of the FIPB, the IPC logo and the “Grown in Idaho®” seal are just about everywhere. In fact, a recent article in the Produce Blue Book called the game, “ESPN’s 3-hour Idaho potato commercial.”