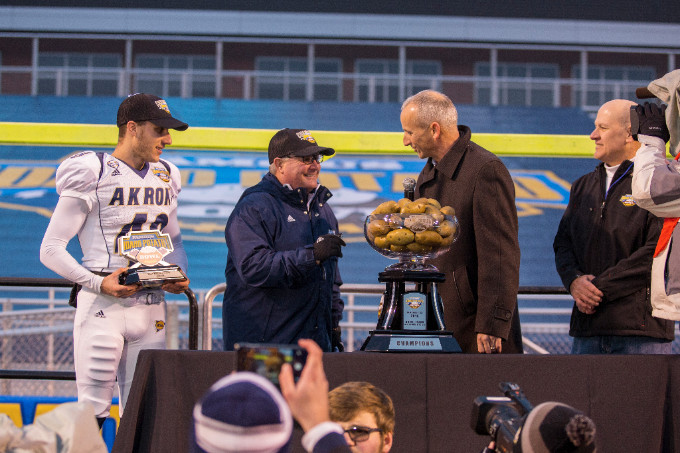 Boise, Idaho (December 29, 2015) - The Utah State University Aggies (Mountain West Conference) were the predicted victors of the Famous Idaho® Potato Bowl, but the Akron Zips (Mid-American Conference) played strong and hard to win their first bowl game ever on the blue turf of Albertsons Stadium in Boise, Idaho. The cold-weather game aired live on ESPN and ESPN Radio on Tuesday, December 22nd with millions of fans tuning in from across the country.

In its fifth year as naming sponsor of the Famous Idaho® Potato Bowl, the Idaho Potato Commission (IPC) has continued to leverage the popularity of and growing interest in college football to promote Idaho® potatoes as an important food to eat regularly to help maintain a healthy lifestyle.

“The Famous Idaho® Bowl is the cornerstone of the Idaho Potato Commission’s fall marketing program, which we support with a variety of initiatives including a national tailgating recipe contest; our long-term partnership with college football sideline reporter, Heather Cox; and an aggressive social media campaign,” explained Frank Muir, President and CEO, IPC. “The game also provides a perfect opportunity for us to remind folks that potatoes are good for them. In order for college athletes, especially football players, to perform at their absolute highest level, they need to eat healthy and nutritious foods like Idaho® potatoes.”

To underscore the IPC’s commitment to promoting a healthy lifestyle, James Lawrence, the Iron Cowboy, was invited to flip the coin. Lawrence made headlines this summer when he set the Guinness World Record for completing 50 Ironman triathlons in 50 consecutive days in 50 states. Lawrence is also a supporter of RODS Racing, a non-profit organization that helps find homes in the U.S. for orphaned children with Down syndrome from other countries. Lawrence appeared on the field during the third quarter with the founder of RODS Racing, Brady Murray, to accept an oversize check for $25,000 from Muir and Dan Nakamura, Chairman of the IPC. 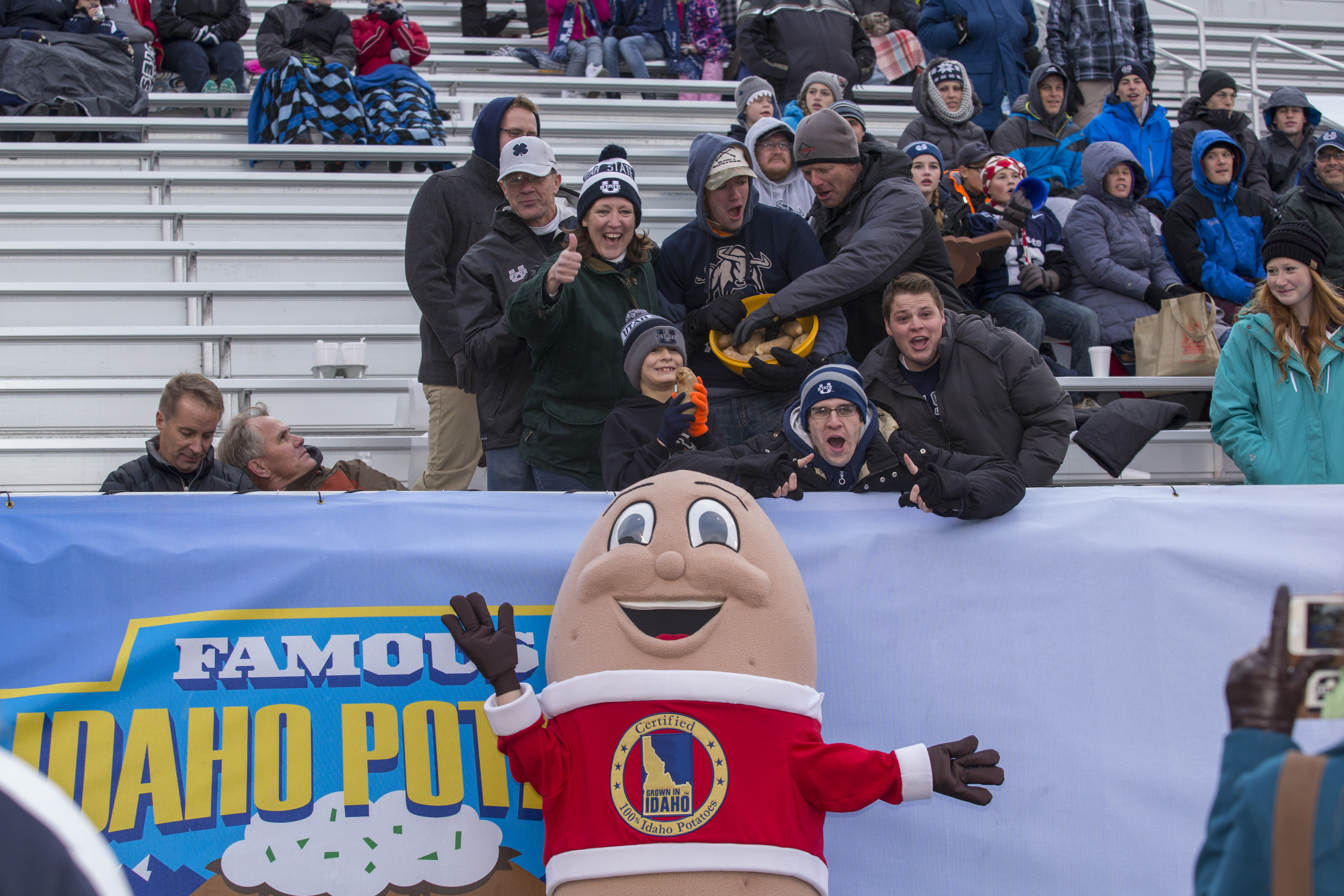 The Idaho Potato Commission’s mascot, Spuddy Buddy, hams it up with fans at the Famous Idaho® Potato Bowl.

The Big Idaho® Potato Truck was also in attendance showing support for two local charities as part of its “A Big Helping" campaign. Everyone who visited the truck was encouraged to sign two pledge posters for RODS Racing and St. Luke’s Children’s Hospital in Boise. For every signature collected, $1.00 was donated to the charity (up to $500 each).

The Famous Idaho® Potato Bowl recognizes the positive impact teams, coaches and student-athletes have in their communities and their leadership roles in promoting humanitarian efforts. Each year, the Bowl generates over $1 million in direct economic impact for the facilities and charities involved. For more information, visit www.famousidahopotatobowl.com.

Established in 1937, the IPC is a state agency that is responsible for promoting and protecting the famous "Grown in Idaho®" seal, a federally registered certification mark that assures consumers they are purchasing genuine, top-quality Idaho® potatoes. Idaho's growing season of warm days and cool nights, ample mountain-fed irrigation and rich volcanic soil, give Idaho® potatoes their unique texture, taste and dependable performance, which differentiates them from potatoes grown in other states.