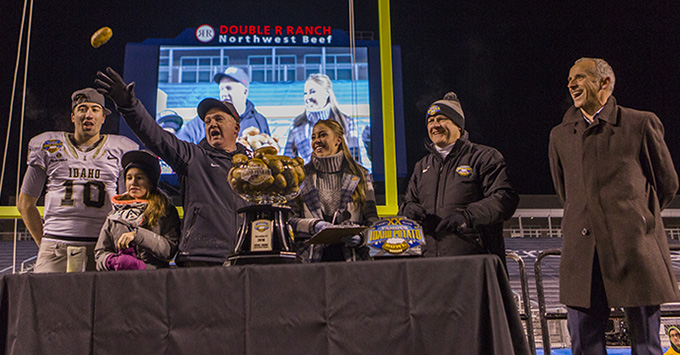 This year marks the Idaho Potato Commission’s (IPC) sixth year as the naming sponsor of the premier cold-weather college football game. Traditionally, teams representing the Mountain West Conference and the Mid-American Conference go head-to-head on the blue turf. However, the University of Idaho Vandals from the Sun Belt Conference were invited to play, resulting in increased TV viewership, game attendance and thousands of happy Idahoans who were able to see the home team win.

“Inviting the Vandals to play was a great decision. The energy was high, the fans were enthusiastic and most importantly the Vandals and the Rams played an incredible game demonstrating their strong offensive lines and sportsmanship,” explained Frank Muir, President & CEO, IPC. “The Idaho Potato Commission is very proud to be the naming sponsor of the Famous Idaho Potato Bowl – a game that promotes athleticism, discipline, determination and a lot of hard work – qualities that all these athletes possess. Congratulations to both teams for playing an outstanding game.”

Contributing to the excitement of the game were the 25 marks/records set including:

In addition to the advertising associated with the game, the IPC was able to further underscore the Idaho® potato brand by:

For more information about the game visit www.famousidahopotatobowl.com.

The Famous Idaho® Potato Bowl recognizes the positive impact teams, coaches and student-athletes have in their communities and their leadership roles in promoting humanitarian efforts. Each year, the Bowl generates over $1 million in direct economic impact for the facilities and charities involved. For more information visit www.famousidahopotatobowl.com.