Who’s The #1 College Football Bowl Mascot? The Idaho Potato Commission’s One And Only Spuddy Buddy! 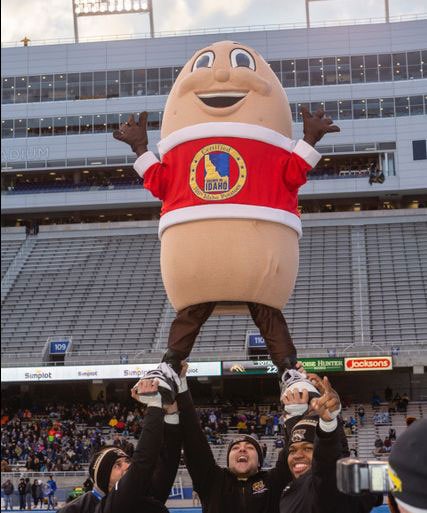 Eagle, Idaho, January 4, 2019 – The competition was fierce, but the Idaho Potato Commission’s (IPC) mascot, Spuddy Buddy was declared the #1 College Football Bowl Mascot by SBNation. Beating out other mascots like the New Mexico Bowl’s Gilden Shirt, the Belk Bowl’s Belkie the Bear and even the Chick-fil-A Cow at the Peach Bowl, the “overexcited, never-blinking humanoid potato” was the hands down winner. Per SBNation, “How could he not be No.1.”

“Spuddy Buddy has won the hearts of millions of folks around the world. People of all ages just can’t help but smile when they see him,” explained Frank Muir, President & CEO, IPC. “Two years ago ESPN named Spuddy Buddy their favorite mascot. I think this is just the beginning of a very long list of accolades for Spuddy Buddy.”

Here are a few fun facts about the famous mascot:

Today Spuddy Buddy is a familiar face in many of the IPC’s marketing programs including the Potato Lover’s Month Retail Display Contest, the Big Idaho® Potato Truck, international conferences and many more.

And, in case you were wondering, Spuddy Buddy can’t talk. He doesn’t need to…his smile says it all.

To keep up with Spuddy Buddy’s adventures, follow the IPC’s social posts and/or search #adventuresofSpuddyBuddy and #spuddybuddy.