World’s Largest Potato on Wheels Will Travel More Than 22,000 Miles to Help Raise Funds and Awareness for Meals On Wheels

Frank Muir (left) and Spuddy Buddy (center) send off the "Tater Team," Paul, Kristie and Tyler, as they kick of the 2013 tour. 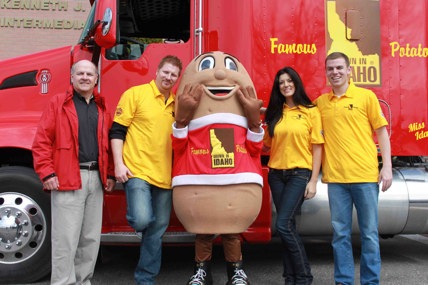 In 2012, the Idaho Potato Commission (IPC) built a larger-than-life version of the vintage Idaho® potato postcard in celebration of the IPC’s 75th anniversary. Weighing in at 6 tons (the equivalent of 32,346 medium-sized Idaho® potatoes), the Great Big Idaho® Potato is traversing the country to greet fans and to help raise funds and awareness for Meals On Wheels Association of America (MOWAA), the oldest and largest national organization dedicated to helping end senior hunger.

“Last year the Truck became a national sensation. We’ve received thousands of emails and calls from folks across the country asking when and where they can see the Truck, and we’re thrilled it’s back on the road,” said Frank Muir, president and CEO, IPC. "Idaho® potatoes are a staple in almost every household in America and are one of the most important agricultural crops in Idaho. Idaho® potatoes generate close to $5 billion in revenue annually and employ more than 30,000 people. The Great Big Idaho® Potato Truck is our unique way of reminding consumers to always look for the famous ‘Grown in Idaho' seal.”

The Truck
Seen by millions of Americans in person and on the national television commercial, the most frequently asked question is, “Is it real?” Well we’ll never tell, but in the event that it is, the Great Big Idaho® Potato …

The Tour
To find out when the Great Big Idaho® Potato Truck will be in a city near you, please visit www.bigidahopotato.com. The website provides in-depth information about the Truck, the IPC’s partnership with MOWAA and weekly updates with tales and photos from the road.

During the Truck's 22,000-mile journey, it will make dozens of stops including: the National Football Hall of Fame, the Kentucky Derby Parade, College Baseball World Series, and a special visit to the World's Largest Catsup Bottle! At the end of the year, it will return to its home turf in Idaho to participate in the third annual Famous Idaho® Potato Bowl at Bronco Stadium in Boise, Idaho.

Meals On Wheels Association of America
In support of Meals On Wheels’ effort to end senior hunger by 2020, the IPC has donated $200,000 to MOWAA. This national organization represents more than 5,000 MOWAA programs across the country that together prepare and deliver more than one million meals each day to homebound seniors. On any given day, between 800,000 and 1.7 million volunteers who donate their time and often their own resources to make sure the elderly in their communities receive delicious, nourishing meals. Potatoes are an important food for these programs because they are nutrient dense, affordable and extremely versatile. And perhaps most importantly, many seniors enjoy eating potatoes.

The MOWAA logo appears prominently on the Truck and on the website www.bigidahopotato.com, where donations can be made electronically. In turn, MOWAA will keep their volunteers and friends updated on the Tour by posting the Truck’s schedule and photos from the road on their Facebook page and website and in their monthly newsletter.

If you are interested in learning more about the organization, visit www.mowaa.org.

About the Idaho Potato Commission
The Idaho Potato Commission is a state agency that is primarily responsible for expanding the markets for Idaho-grown potatoes through advertising, promotion and research. The Commission also protects the use of the "Idaho® potato" and "Grown in Idaho®" seals, which are federally registered Certification Marks that belong to the IPC. These Marks ensure that consumers are purchasing potatoes that have been grown in the state of Idaho.