Ships Ahoy! The Idaho Potato Commission and Mr. Food Salute the Sailors Aboard the USS Ross with All American Breakfast

“It was an honor to be able to thank the troops for their service and the sacrifices they make for each and every one of us,” said Frank Muir, President & CEO, IPC. “We’re extremely proud of the men and women who fight for our freedom, and we couldn’t think of a better way to honor them than with a hearty breakfast made with America’s favorite potato!”

Spuddy Buddy and Idaho Potato Commissioner and grower Mark Coombs were part of the breakfast festivities. 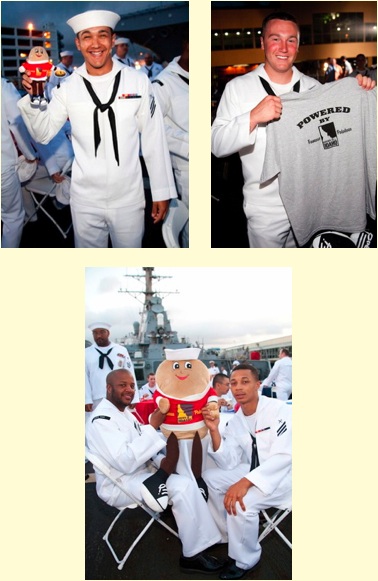 Each sailor received their own Spuddy Buddy doll and "Powered by Idaho®" t-shirt.

The Breakfast Potato Boats were a hit with all the sailors.

Additional photos from the event can be found on the Famous Idaho® Potatoes Facebook page, http://facebook.com/famousidahopotatoes.

Mr. Food’s special “Salute the Troops” vignette is scheduled to air on June 28. To find out what time it airs in your area and to get the recipe for Breakfast Potato Boats, visit www.mr.food.com.