Chef Carlos was one of 12 chefs who battled out on the beach for a “good cause”! A $5,000 donation was made in his name to Florida International University’s School of Hospitality and Tourism Management on behalf of the Idaho Potato Commission. 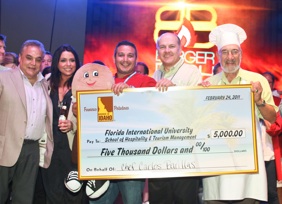 Get an inside look at the South Beach Wine & Food Festival as Frank Muir joined forces with Mr. Food to pick the perfect potato preparation in the Idaho® Potato Side Dish Challenge. View the video here!