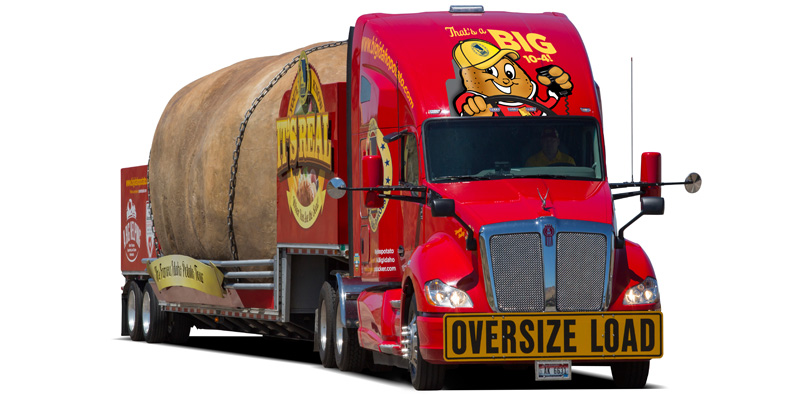 In the Next Six Months the Truck Will Travel 23,000 Miles, Visit More Than 60 Cities and Meet Millions of Spud Lovers

Boise, IDAHO (March 2017) – The Big Idaho® Potato Truck is back on America’s highways promoting Idaho’s most famous agricultural product, the Idaho® potato. In just six months, the Truck will log 23,000 miles, stop in more than 60 cities, both large and small, and be photographed millions of times by spud lovers across the country. The Truck’s popular “A Big Helping” charitable program will continue to support local non-profits across the country.

“When we launched the Truck six years ago, it was intended to be a one year campaign. Instead, the Truck became an overnight sensation – reminding consumers at every turn to look for the ‘Grown in Idaho®’ seal, which is prominently featured on the side of cab,” explained Frank Muir, President & CEO, Idaho Potato Commission (IPC). “We placed several other graphics on the Truck to communicate important key messages such as the Idaho® potato’s certification by the American Heart Association as a heart-healthy food; the Famous Idaho® Potato Bowl logo, the premier cold-weather college football bowl game; Spuddy Buddy, the Idaho® potato mascot; and important nutrition facts.”

The Tour
The Truck’s first national appearance is the International Cherry Blossom Festival in Macon, GA. Other stops throughout the summer include the Memorial Day Parade in Washington, DC, the Potato Chip Festival in Saratoga Springs, NY and the NASCAR Pocono Raceway Cup Series. To view the entire calendar visit www.bigidahopotato.com. If you can’t see it in person, there are a few other ways to stay connected…

The Truck
The Big Idaho® Potato weighs more than 6 tons - the equivalent of 32,346 medium-sized Idaho® potatoes. After being seen by millions of Americans, the most frequently asked question is still, “Is it real?” We’ll never tell…but if it is, the Big Idaho® Potato:

To date, the Truck has visited 48 states (all but Hawaii and Alaska); traveled through 5,000+ towns/cities; and traveled more than 100,000 miles since its 2012 launch celebrating the 75th Anniversary of the IPC. The Big Idaho® Potato Truck took a full year to design and build. It was built by Chris and Sharolyn Schofield of Weiser, Idaho with the help of a few specialized contractors.

A Big Helping
The Big Idaho® Potato Truck Tour has always had a charitable component to it, and now in its third year, “A Big Helping” is the Truck’s “personal” way of assisting local charities across the country. During its six-month tour, the Truck will work with local charities in the markets they visit to help build awareness and funds for their cause. Past recipients have included food banks, children’s hospitals and animal shelters.