Boise, Idaho (January 4, 2016) -- For the third consecutive year, the Idaho Potato Commission (IPC) was a major sponsor of the New Year’s Eve Idaho® Potato Drop in downtown Boise, Idaho. Seconds before midnight, against a backdrop of fireworks, a 17-foot long potato was lowered by crane into a crowd of more than 40,000 revelers.

“Every year the New Year’s Eve Idaho® Potato Drop generates more excitement and publicity, both regionally and around the globe, for one of Idaho’s most important agricultural products, the Idaho® potato,” explained Frank Muir, President and CEO, IPC. “As a sponsor of this family-friendly event, we wanted more than just our name connected to the occasion. Our popular mascot, Spuddy Buddy, was cheering in the New Year with the crowds, and the famous Big Idaho® Potato Truck was also a part of the festivities.” 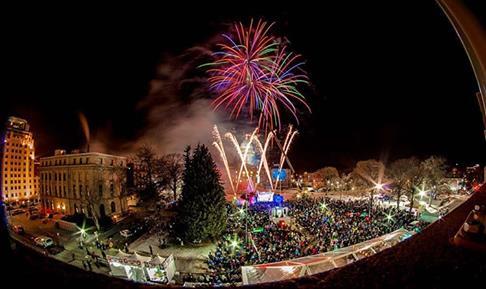 The Idaho New Year’s Eve Commission was established to create an annual New Year’s Eve event in Boise that would bolster the local economy and demonstrate pride for one of Idaho’s most important agricultural products, the Idaho® potato. The goal is to make the Idaho® Potato Drop a nationally recognized event and put Boise on the map as a world destination for New Year's Eve.

Established in 1937, the IPC is a state agency that is responsible for promoting and protecting the famous "Grown in Idaho®" seal, a federally registered certification mark that assures consumers they are purchasing genuine, top-quality Idaho® potatoes. Idaho's growing season of warm days and cool nights, ample mountain-fed irrigation and rich volcanic soil, give Idaho® potatoes their unique texture, taste and dependable performance, which differentiates them from potatoes grown in other states. For more information, please visit www.idahopotato.com.