EAGLE, Idaho, May 13, 2013—Social media is hotter than ever and the Idaho Potato Commission (IPC) is incorporating these unique direct-to-consumer communication vehicles into most all of its marketing campaigns. From Facebook to Twitter to Instagram to Pinterest, to developing strong relationships with bloggers, the IPC has been able to significantly increase the Famous Idaho® Potato brand’s presence on the Internet while reinforcing its image as a quality, premium product.

“Social media has enabled us to bring our marketing programs to life. Not only are we able to generate immediate feedback from shoppers, we can better engage them through dialogue and the personal experiences they share with us,” explained Frank Muir, President & CEO, IPC. “I’m very proud of the campaigns we’ve launched this year and am looking forward to taking each of them to the next level.”

The Great Big Idaho® Potato Truck
When the IPC launched the Great Big Idaho® Potato Truck last year, it was an instant success. Folks across the country clamored to see the six-ton spud on wheels. Back by popular demand, the Truck is once again on the road and its popularity is being fueled by social media more than ever before. The Truck’s hashtag #bigidahopotato is being used daily by folks who spot the venerable vegetable.

Blogger Harvest Tour
In September, the IPC invited 11 food bloggers from across the country to Eastern Idaho to experience the potato harvest firsthand. These writers met farmers, learned about the famous Idaho russet and other varieties, visited packing and shipping facilities, toured a dehy plant and even dug up their own spuds. 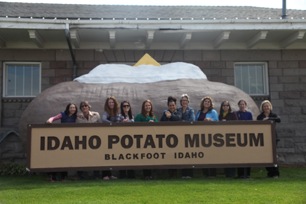 Idaho® Potato Passport Challenge for Bloggers at PMA
The IPC invited 30 Los Angeles-based food bloggers to PMA Fresh Summit in October to learn about the fresh produce industry and specifically Idaho® potatoes. To help engage the bloggers, the IPC created a “Potato Passport” challenge that encouraged them to visit six Idaho® potato grower/shipper booths as well as the Big Idaho® Potato Truck. A total of 21 bloggers completed the challenge and received a prize package.

Overall, the IPC generated a great deal of positive buzz for Idaho® potatoes on Twitter and even made the “Top Trending Topic” while competing against other brands, including Staples and a popular beauty product website. The results: Over 200 participants, with an average of 2,038 followers each, and a total of 8.3 million Twitter impressions.

The newsletter reaches more than 70,000 subscribers and consistently performs well, with an open rate of 12 to 15 percent, and a read rate of 9 to 11 percent.

2012 Harvest Potato Giveaway:
Three lucky fans each won a 20-lb gift box of fresh Idaho® russet potatoes. Potato giveaways continue to be the most popular among the IPC’s fans. This giveaway generated 6,085 entries.

Famous Idaho® Potato Bowl Cross Promotion and Giveaways:
The IPC worked in partnership with the Famous Idaho® Potato Bowl’s social media team to drum up excitement for the Bowl on Facebook with various promotions and giveaways. This collaboration helped FIPB more than double their number of Facebook Page Likes in just a few weeks by promoting their content and holding potato giveaways.

Engaging Social Media Content:
Every week the IPC creates a variety of posts to encourage interaction among its Facebook fans. The most popular post in December (and of all time!) generated 1,408 likes, 301 shares, and 39 comments, and helped catapult the page past 20,000 Page Likes. This post also helped us to achieve 2,870 page interactions and 25,006 impressions in one week. 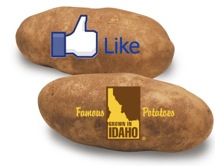