EAGLE, ID, December 14, 2011—When the Utah State Aggies and the Ohio University Bobcats go head to head in the inaugural Famous Idaho® Potato Bowl, there will be no question that the Idaho Potato Commission (IPC) is sponsoring the "spudtacular" showdown. In the tradition of the Orange Bowl and others that recognize the importance of a state's agricultural foundation, and on the eve of its 75th anniversary year, the IPC is proud to be the title sponsor of a Bowl game in their home state.

"The Famous Idaho® Potato Bowl provides a fantastic opportunity to showcase Idaho® potatoes, the state's top agricultural export, to millions of football fans and consumers around the country," said Frank Muir, President and CEO, Idaho Potato Commission. "In addition to generating media coverage of the game itself, we've been able to leverage our sponsorship to communicate the versatility and nutritional value of Idaho® potatoes and remind folks to always look for the famous 'Grown in Idaho®' seal." 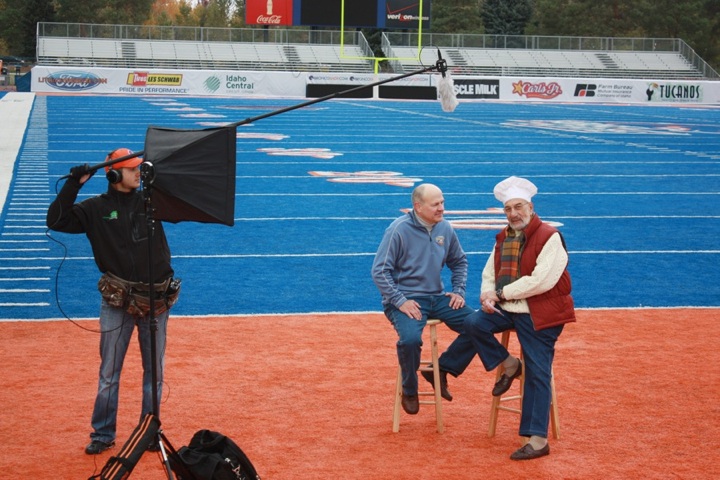 In the tradition of the Humanitarian Bowl (the former name of the Famous Idaho® Potato Bowl), many events during game week will raise funds and awareness for local charities, including the United Way, Optimist Youth Football, Big Brothers Big Sisters, the Boise School District, Treasure Valley YMCA, Boys and Girls Clubs, Girl Scouts, and Armed Forces personnel. In addition, the Idaho Grower Shippers Association will donate three potatoes to The Idaho Foodbank's Eastern Idaho branch for each fan attending the game. With more than 28,000 fans expected, the donation could total 84,000 potatoes or 42,000 pounds.

Among other highlights at the Bowl game will be the debut of the Great Big Idaho® Potato Truck, "the largest potato on wheels." Weighing in at more than 12,000 pounds, the 48-foot long, 12-foot wide and 11.5-foot tall Great Big Idaho® Potato will travel across the country next year visiting customers, stopping by trade shows and of course, meeting millions of Idaho® potato fans along the way. In celebration of the IPC's anniversary, the truck will help raise awareness and funds for the Meals on Wheels Association of America.

To help consumers around the country embrace the spirit of this cold-weather game, the IPC initiated the following:

As part of its sponsorship package, the IPC will receive extensive recognition during the game and throughout the stadium including:

The Famous Idaho® Potato Bowl is the second game on the Bowl calendar and will be broadcast nationally on ESPN and on ESPN Radio on Saturday, December 17th at 3:30pm MT. The game, which has been played since 1997, has an average score of 38-25 and five of the past seven games were won on the final drive. The Aggies finished their final season with an overall record of 7-5, and the Bobcats, completed theirs with a record of 9-4.

Both the Aggies, from the Western Athletic Conference (WAC), and the Bobcats, from Mid-American Conference (MAC), finished second in their respective conferences. This will be the second time in history the two teams will play one another.