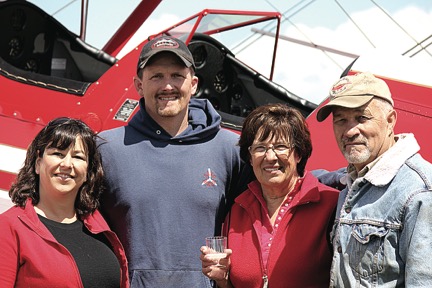 James Hoff (second from left)and Bob Hoff with their wives, Darla and Jane (Photo courtesy of the Hoff family)

EAGLE, Idaho, September 29, 2015 – The Idaho Potato Commission (IPC) announced the recent appointment of James Hoff as a new Commissioner who will a serve three-year term. James Hoff of Hoff Farms in Idaho Falls will be formally sworn in at the IPC’s October meeting. Dan Nakamura and Lynn Wilcox, who have already served one term, will be sworn in for second three-year terms. The Commissioners were nominated by industry peers and selected by Governor C.L. "Butch" Otter.

"James has been involved with the IPC for many years but most notably, James and his red bi-plane appeared in the IPC’s 2014 national television commercial," said Frank Muir, President & CEO, IPC. "I look forward to working with James and the other eight Commissioners in what promises to be one of our most successful years yet."

Hoff is a fourth generation Idaho® potato grower whose family farm is located about four miles south of Idaho Falls. He has been involved with his family farming operation since he was 13 years old. He is currently the Chief Operating Officer of the farm and is eager to jump into this new leadership position.

The eight other Commissioners representing the Idaho® potato growers, shippers and processors are: