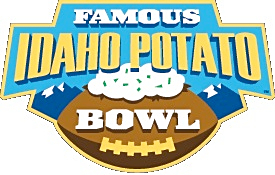 "The Famous Idaho® Potato Bowl has become a tradition for the Idaho potato industry. It’s really the only opportunity for growers, shippers, processors and vendor partners to come together and support a nationally recognized sporting event that showcases the potato, one of Idaho’s most important agricultural products,” said Frank Muir, President and CEO, Idaho Potato Commission (IPC). “More people purchase Idaho® potatoes in November and December than any other time of year and this bowl game helps remind millions of consumers to always look for the famous 'Grown in Idaho®' seal when buying potatoes.”

Anyone watching the game will have no doubt who the title sponsor is. The IPC will receive extensive recognition during the game and throughout the stadium including:

Doing Good for the Community
As in previous years, the Great Big Idaho® Potato Truck, "the largest potato on wheels," will be in the Albertsons' Stadium parking lot partaking in all the pre-game festivities. The 6-ton tater recently finished its third cross-country tour in as many years. It stopped in dozens of cities with a very important message for women: Take care of your heart. The Truck is currently a sponsor of the American Heart Association’s Go Red for Women movement. The partnership is a perfect fit for America’s favorite vegetable as Idaho® potatoes are certified as a heart-healthy food by the American Heart Association.

To showcase its pride of this certification, while at the game, the Truck will help raise funds for Boise’s American Heart Association chapter. From Noon – 3:45pm a “Signature Board” will be set up in front of the Truck and for every signature collected, $1.00 (up to $500) will be donated to support the organization’s local initiatives.

The Idaho Grower Shippers Association (IGSA) will donate three potatoes to the Idaho Food Bank's Eastern Idaho branch on behalf of each fan who attends the game. Last year approximately 42,000 pounds of potatoes were donated!

Additionally, RODS Racing, a non-profit organization comprised of elite athletes who help raise funds to find homes in the United States for orphaned children with Down syndrome, will be recognized during the game. Muir will present Brady Murray, the founder of RODS, with an over-sized check for $25,000, representing the donation the IPC made earlier this year.

The Game
Western Michigan University finished their season with an overall record of 8-4, and the Air Force Academy closed theirs with a 9-3 record. The Famous Idaho® Potato Bowl is the fourth game on the Bowl calendar and will be broadcast nationally on ESPN and on ESPN Radio.

About the Idaho Potato Commission
Established in 1937, the Idaho Potato Commission (IPC) is a state agency that is responsible for promoting and protecting the famous “Grown in Idaho®” seal, a federally registered certification mark that assures consumers they are purchasing genuine, top-quality Idaho® potatoes. Idaho’s growing season of warm days and cool nights, ample mountain–fed irrigation and rich volcanic soil, give Idaho® potatoes their unique texture, taste and dependable performance. These ideal growing conditions are what differentiate Idaho® potatoes from potatoes grown in other states. For more information, visit: www.idahopotato.com.

About the Bowl
The Famous Idaho® Potato Bowl recognizes the positive impact teams, coaches and student-athletes have in their communities and their leadership roles in promoting humanitarian efforts. Each year, the Bowl generates over $1 million in direct economic impact for the facilities and charities involved.

The Famous Idaho® Potato Bowl is one of 11 postseason games owned and operated by ESPN Events, a subsidiary of ESPN.