BOISE, Idaho (December 31, 2013)—The San Diego State Aztecs went up against the Buffalo Bulls to bring home the Famous Idaho® Potato Bowl ”bowl” on Saturday, December 21 in a cold-weather showdown on the blue turf in Boise, Idaho. With attendance topping 28,000, the game, now owned by ESPN, was telecast live during prime viewing time and enjoyed by more than two million fans.

“We are thrilled to continue this highly successful sponsorship which brings such incredible exposure to the great state of Idaho and one its top agricultural exports - Idaho® potatoes.” said Frank Muir, President and CEO, Idaho Potato Commission (IPC). “This is the perfect sports experience to connect both locally with Idahoans; and with football fans and potato-lovers throughout the U.S.”

This year, Idaho Governor C.L. “Butch” Otter was in attendance. Prior to kick-off he visited the Great Big Idaho® Potato Truck and was interviewed by college football reporter and Boise local, Heather Cox. Showing his support for this game that generates more than $1 million in revenue and charitable support, Governor Otter accompanied Frank Muir, Miss Idaho and Spuddy Buddy on the field to flip the specially commissioned commemorative coin during the coin toss.

IPC Chairman Dan Moss and Frank Muir present Brady Murray and his son Nash a check for $50,000 to RODS Racing. 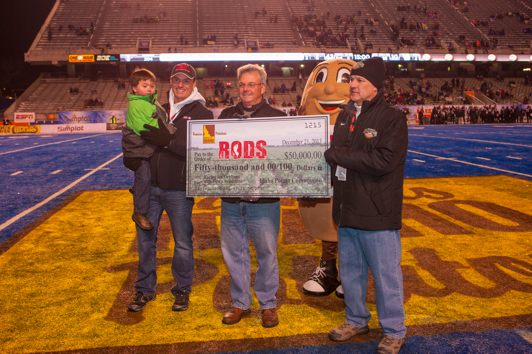 Another special guest attended the game – Brady Murray, the founder of RODS Racing and his son Nash. Between the third and fourth quarters, IPC Chairman Dan Moss and Frank Muir presented Brady and his son a check for $50,000 to RODS Racing on the twenty-yard line. Nash is Brady’s inspiration for founding RODS Racing, a non-profit organization that helps find homes in the U.S. for orphaned children in other countries with Down syndrome.

The IPC also received extensive recognition during the game and throughout the stadium including:

The Great Big Idaho® Potato Truck
Outside of the stadium, The Great Big Idaho Potato Truck, also known as “the largest potato on wheels,” made one of its last public appearances of 2013. On its nationwide journey this year, the truck raised awareness and funds for Meals On Wheels, the nonprofit organization that delivers one million meals each day to homebound seniors. Football fans and potato lovers alike were able to see the impact the record-breaking truck has made on the cause it so heavily advocates. 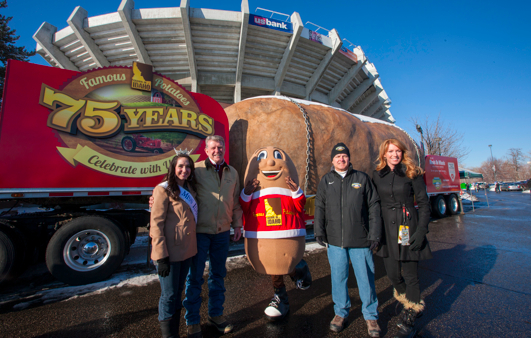 About the Famous Idaho® Potato Bowl
The Famous Idaho Potato Bowl recognizes the positive impact teams, coaches and student-athletes have in their communities and their leadership roles in promoting humanitarian efforts. Each year, the Bowl generates over $1 million in direct economic impact for the facilities and charities involved. For more information, visit www.famousidahopotatobowl.com.