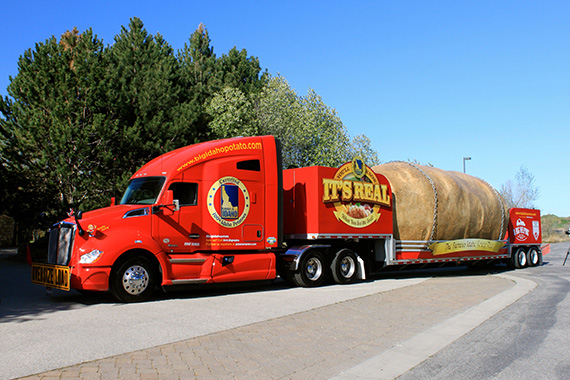 EAGLE, Idaho, November 4, 2015 – After four years on the road, the jaw-dropping, head-turning Big Idaho® Potato Truck continues to generate excitement everywhere it goes. In 2015 the Big Idaho® Potato Truck visited 49 cities, clocked more than 22,087 miles, and raised thousands of dollars for local charities across the country. The Big Idaho® Potato Truck had a new mission in 2015 to deliver “A Big Helping” to charities across the U.S. by providing them with a unique opportunity to raise money and awareness for their cause.    “The Truck has always had a charitable component to it, and for the 2015 tour we wanted to be more involved with the donations and to provide assistance to a variety of organizations,” explained Frank Muir, President and CEO, Idaho Potato Commission (IPC).  “ ‘A Big Helping’ was not only a huge success, it was also extremely rewarding. We helped raise money for a parks department in Tennessee to build a wheelchair accessible ramp, we provided funding for a public garden in Boise, Idaho and we met Jacob Walker, the world’s smallest boy, and donated to his Make-A-Wish fund to get him to Disney World.”    Local charities in 13 markets participated in "A Big Helping" program. At each event, the Tater Team encouraged attendees to sign a poster and for every signature collected the IPC made a donation of one dollar – collecting up to $500 for each charity. In addition to the charity tie-in, the IPC used a number of communication tools to engage consumers across the country:

Notable stops during the 5-month tour included the Kentucky Derby, a NASCAR event in Bristol, TN; the National Memorial Day Parade in Arlington, VA; and the Seafair Festival in Seattle, WA. The Big Idaho® Potato Truck surprised potato lovers across the country by stopping at the famous Fork in the Road in Pasadena, CA to help raise money for a local animal shelter, made an appearance at the Maxwell Air Force Base in Gunter, AL and participated in seven parades across the country.   The tour began in 2012 as a one-year campaign to celebrate the IPC’s 75th anniversary and it was apparent from the start, based on the reaction from consumers, the industry and the media, that the Truck would not be retiring anytime soon. Today, it’s a pop culture icon that has visited 48 states, met millions of people across the country and generated billions of media impressions.