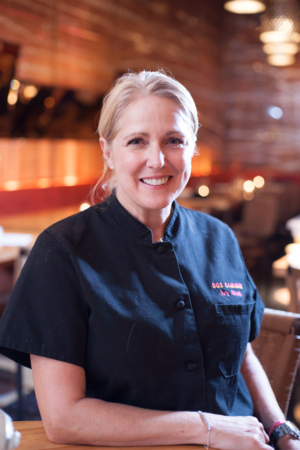 
Ivy Stark is the Corporate Executive Chef of the popular modern Mexican restaurant Dos Caminos with six U.S. locations in New York City, Atlantic City, and Fort Lauderdale. After graduating with a Bachelor of History from University of California, Los Angeles, Ivy went on to culinary school at Peter Kump’s (now the Institute for Culinary Education). She has worked in many highly-acclaimed restaurants including Border Grill, Cena, Ciudad, Zocalo, and Rosa Mexicano. Regarded as a trusted authority on Mexican cuisine, Stark is ranked among New York’s top chefs and has been consistently featured on national and local TV broadcasts including the Today Show, CBS Early Show, ABC News, and WABC-TV as well as being cited as an authority on Mexican cuisine. Her first book, “Dos Caminos' Mexican Street Food: 120 Authentic Recipes to Make At Home,” was released in Octob er 2011, and she was nominated for the 2012 Golden Whisk Award by the Women Chefs and Restaurateurs (WCR) organization, recognizing Stark’s commitment, excellence and innovation as a chef and as a woman. Her second cookbook entitled “Dos Caminos Tacos: 100 Recipes For Everyone’s Favorite Mexican Street Food” hit shelves in May 2014.