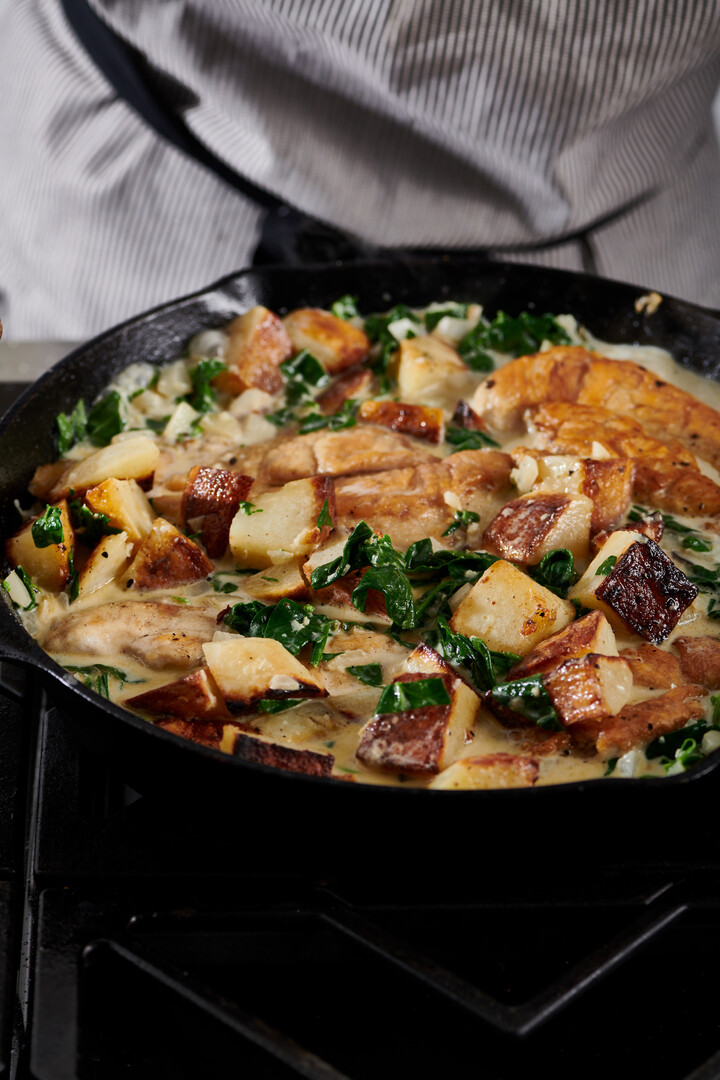 This is a one-dish wonder, a complete chicken and potatoes meal in one skillet, with a lush creamy sauce that pulls it all together. If you want to peel and cube the potatoes and ahead of time, keep them in a bowl of cold water until you are ready to cook them so they don’t start to discolor. Searing the potatoes on several sides adds the flavor and texture of caramelization, but it’s not necessary to brown all of the sides.  They will finish cooking in the sauce with the chicken.

Don’t forget to pass some extra Parmesan on the side.

In a very large skillet, heat 2 tablespoons of the olive oil over medium high heat.  When the oil is hot, add the potatoes, season with salt and pepper, and leave the potatoes alone for about 4 minutes, until the underside is browned. Flip the potatoes and let another side brown, then repeat, cooking the potatoes for about 15 minutes total (not all of the sides will brown, which is fine). Remove the potatoes with a slotted spoon or tongs to a plate.

Meanwhile, combine the flour, 1 teaspoon salt and ½ teaspoon pepper in a shallow bowl.

Heat another tablespoon of oil in the same skillet over medium high heat.  Dredge the chicken cutlets in the flour mixture. Once the oil is hot, cook the cutlets in the pan for about 3 to 4 minutes on each side until they are golden brown, and but not cooked through (still very pink in the center). Transfer the browned cutlets to a large plate..

Turn the heat down to medium, add the remaining tablespoon olive oil, then add the onions. Cook, stirring frequently, for about 3 minutes, until the onions are slightly tender and golden. Stir in the garlic for 1 minute, until you can smell the garlic.  Add the chicken broth, bring to a simmer and stir so that any browned bits stuck to the bottom of the pan are released into the liquid. Stir in the spinach, then add the cream, and Parmesan. Bring to a simmer and cook, stirring frequently, until the sauce thickens slightly, about 2 minutes.

Add the potatoes back to the pan and tuck the chicken back into the pan amidst the potatoes, with any juices that may have collected on the plate; the chicken should be at least mostly covered by the sauce. Bring to a simmer and simmer for about 6 to 8 more minutes until the chicken and potatoes are cooked through.

Sprinkle with the parsley, and serve hot in shallow bowls with the extra Parmesan passed on the side.