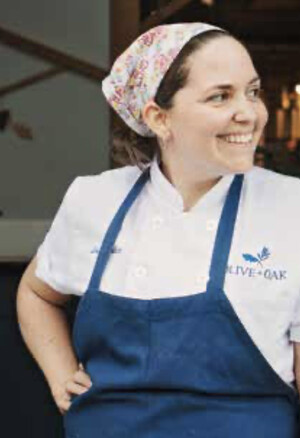 Chef Jesse Mendica knew the kitchen was her future at age 16 while working at a mom and pop Italian restaurant. She describes her cooking style with two words: “Why not?” She will try anything. For her, a “what if” thought when acted upon becomes something new and delicious. “Food doesn’t always follow rules,” she says. “It doesn’t always make sense.” What does make sense to her and the restaurant owners is creating a welcoming space where people feel comfortable and safe to explore and try new things.

Papas Bravas paired with grilled octopus, a dish from Latin America and Spain, had intrigued her for years. While octopus can be intimidating, she views fried potatoes as a universal friend to other foods and to diners’ palates. For her, adding potatoes makes otherwise unfamiliar ingredients or dishes more approach- able. This dish is a popular starter at Olive + Oak. The pre-cook is important for the octopus, Mendica says, and cooling the baked potatoes before cutting them into bite-sized pieces is important for achieving a crisp outside and fluffy inside. Sherry vinegar aïoli drapes across the top, blending the flavors and coating the ingre- dients. “The waxy flesh of Idaho® Red potatoes lends well to the bake-then-fry process. Their sweetness is not lost,” says Mendica. “Idaho® Potatoes are universal pleasers. They are simple, familiar, filling, affordable and versatile.” Her rewards come when guests share their enthusiasm for a dish and when giving “high-fives” to her team after a busy night of service.

Jesse Mendica was the only female competitor in the St. Louis Sous Chef Iron Chef Competition in 2012. She was named a semifinalist for Best Chef: Midwest by the James Beard Foundation in 2017 and 2019. 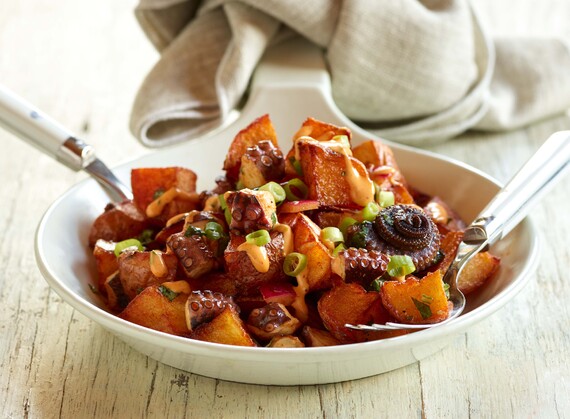