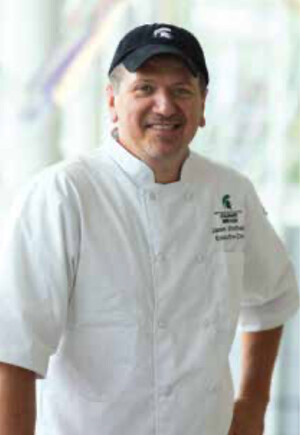 Executive Chef Jason Strotheide and his team serve anywhere from 4,000 to 6,000 meals a day at Brody Square, Michigan State’s largest residential dining facility. After more than 25 years in food- service, Strotheide is still happy to be working in a career he loves.

The inspiration for the recipe is a fried aloo (potato) pie that Strotheide first tasted on the streets of Bogata, Colombia. The dish has origins in Trinidad and Tobago. His version of Aloo Pie is now a featured item at Brody Square’s Veg Out station. “Across the globe, food is so much the same,” says Strotheide. “Whether you call it an empanada, a calzone or a samosa, Aloo Pie is just another version of a hand-held pie.”

Strotheide loves the North African-West Asian flavor profile of the Aloo Pie. In the filling, Idaho® Russet potatoes and freekeh (roasted green durum wheat) absorb the flavors of curry, ginger, garlic, onion and chiles. The crust is light and made crispier with the addition of Idaho® Potato flakes. “The operational challenge is not creating vegan food, but creating vegan food that all of our students will like,” says Strotheide. “The pie is full of flavor, and you are not left wanting.”

He finds that potatoes are something that every culture is familiar with, transporting students to another world or back home. Mashed potatoes, rotisserie chicken and gravy are on the menu every day, with several hundred pounds of Russet potatoes served daily. “The chicken and mashed potatoes almost match each other pound for pound,” he says. “Potatoes never get old.”

Jason Strotheide is a 19-year veteran of award-winning, self-operated, Michigan State University dining. He loves being surrounded by young people. “You build relationships with these young adults and then you get to see them go out into the world and be successful," he says. 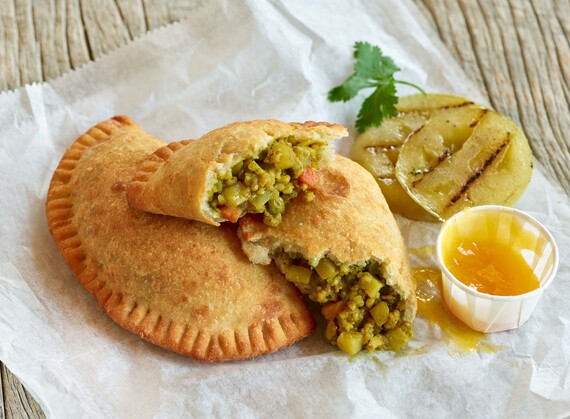