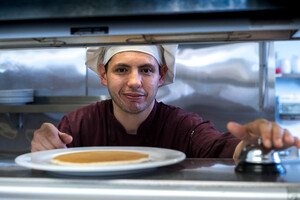 Breakfast at Tiffany’s is a beloved neighborhood diner in the heart of San Francisco’s Portola neighborhood known for its down-home American breakfast and lunch. This popular gathering spot has earned a loyal and enthusiastic following for almost 40 years, and is one of the city’s few remaining diners, complete with counter, swivel seats, and hearty fare. The prior owner, Gerald “Gerry” Adan, presided over Breakfast at Tiffany’s from the griddle starting in 1978, and the restaurant is named after his niece, Tiffany. After Gerry’s passing, the restaurant was purchased and renovated by Omakase Restaurant Group, which kept the menu that Adan originally created.

Chef Dennis Baca, who began working with Adan at Breakfast at Tiffany's in 2010, is still behind griddle. Prior to Breakfast at Tiffany's, Baca worked at the now-closed Starvin Marvin in San Francisco as a cook for two years. Baca learned how to cook from his father. He enjoys cooking for family and friends in his spare time, as well as spending time outdoors.