Cypress
Charleston, SC Chef Craig Deihl grew up in a quintessential American household, "Ozzie and Harriet" style. Every evening, dinner was on the table by the time his father was home from work; his mother, an "unbelievable" cook, graced the familys table with homespun meals he recounts today with the kind of reminiscence that makes mouths water. For Deihl, this table-time ritual remains one of the biggest influences he has had as a chef. Lauded for his rich interpretation of Southern cuisine, he is actually no son of the South - he grew up in Danville, Penn., on a seven-acre farm inherited as a wedding gift to his parents from his grandfather. But its how people relate to food - not their gastronomy - that matters most to Deihl, and this philosophy continues strong at Artisan Meat Share.Deihl is a founding member of the Butchers Guild, a network of meat professionals that promotes responsible butchering through education and community. Deihl was chosen in 2010 as Chef of the Year by the Charleston chapter of the American Culinary Foundation. That same year, he was a semi-finalist for a prestigious James Beard Foundation award for best chef Southeast, and was a nominee for the award in 2011 and 2012, as well as a semi-finalist again in 2013. Since 2011, he has led Slow Food Charlestons Chefs-in-Schools program, which places local chefs in schools and educates students on healthy food choices through classroom demonstrations, after-school programs, tastings and professional development. Through a partnership with the American Livestock Breeds Conservancy (ALBC) and farmer Gra Moore of Carolina Heritage Farm, Deihl had the opportunity to be the first chef in over 100 years to utilize the rare American Guinea Hog. This same passion for preserving meat prompted him to adopt the CSA-like concept for meats, Artisan Meat Share (AMS). Started in November of 2009, participants receive local charcuterie and local farmers, in turn, receive support from the increased product demand in what Deihl describes as a win-win scenario for both. Part of preserving is the commitment to utilizing every part of the animal, and Deihl takes pride in the over 80 types of charcuterie prepared, stored and cured in-house at Cypress. Now, Artisan Mean Share at 33 Spring St. provides a place where guests can enjoy all that AMS has to offer, all the time - including award-winning charcuterie, freshly butchered meat and delicious sandwiches. 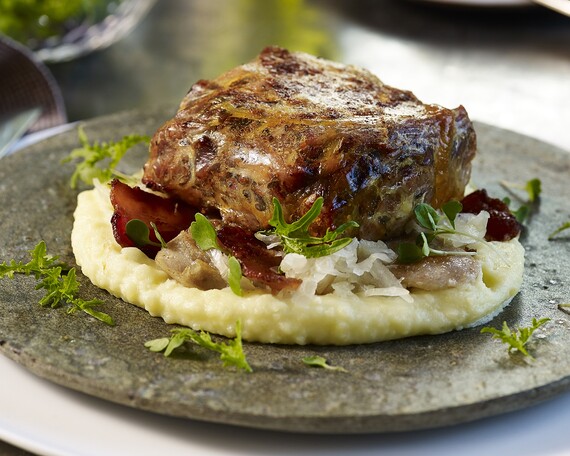