Truck is a Big Hit in Dunwoody, Ga. Fourth of July Parade

Atlanta, GA, July 6, 2012—As part of its cross-country tour, the Great Big Idaho® Potato Truck spent a few days enjoying the southern hospitality in Atlanta, Ga. One of its first stops was the Atlanta Food Truck Park on 1850 Howell Mill Road. Lunchtime visitors had an opportunity to view this “spudtacular” vehicle and four local Meals On Wheels agencies received a total of 350,000 servings of Idahoan Mashed Potatoes, ready-to-serve, dehydrated potato products.

“We are very appreciative of everything Meals On Wheels does to help nourish more than 1,000 homebound seniors in the Atlanta area everyday,” said Karen Clark, Communications Manager, Idahoan Foods. “We are very supportive of this organization and it is our sincere pleasure to be able to donate 350,000 servings of Idahoan Mashed Potatoes.” 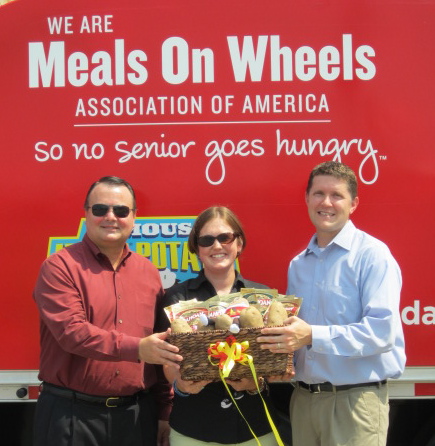 The IPC built the truck, a larger-than-life version of the vintage Idaho potato postcard, in celebration of its milestone 75th Anniversary. Weighing in at six tons (the equivalent of 32,346 medium-sized Idaho® potatoes), the Great Big Idaho® Potato is traversing the country to greet fans and to help raise funds and awareness for the Meals On Wheels Association of America (MOWAA), the oldest and largest national organization dedicated to helping end senior hunger.

“This is a very special year for us as we recognize an industry that has worked tirelessly to grow the finest potatoes available. We know that our potatoes provide nourishment to millions of folks every day of the year, but many don’t realize how important the potato industry is to Idaho,” explained Frank Muir, president and CEO, IPC. “Idaho® potatoes generate more than $4 billion dollars in revenue annually and employ more than 30,000 people. Agriculture and potatoes in particular are the primary reasons Idaho is among the most fiscally sound states in the nation.” 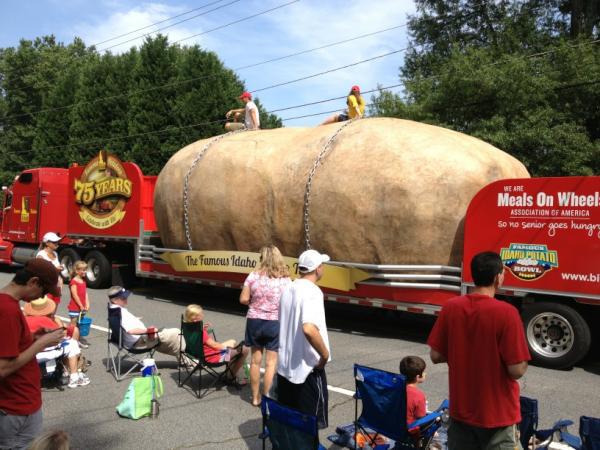 The Tour
To find out when the Great Big Idaho® Potato Truck will be in a city near you, please visit www.bigidahopotato.com. The website provides in-depth information about the Truck, the IPC’s partnership with MOWAA and is updated regularly with tales and photos from the road. Information can also be found on Facebook and Twitter.

Folks who stop and see the Truck are invited to take photos with this all-American icon and share them with their friends and family.

Following the Truck’s cross-country tour, it will be back on its home turf in Idaho to celebrate the 2012 harvest at Shelley Spud Days as well as to participate in other events around the state.

Meals On Wheels Association of America
In recognition of its milestone anniversary, the IPC made a $100,000 donation to MOWAA. This national organization represents more than 5,000 MOWAA programs across the country that prepare and deliver more than one million meals each day to homebound seniors. It is estimated that on any given day, there are between 800,000 and 1.7 million volunteers donating their time and often their own resources to make sure the elderly in their communities are nourished. Potatoes are an important food for these programs, because they are nutrient dense, affordable and extremely versatile. And maybe most importantly, they are a food that many seniors enjoy.

Those who visit the Truck will be encouraged to make a $7.00 donation to MOWAA, the cost of preparing and serving one meal. The MOWAA logo prominently appears on the Truck and on the website where donations can be made electronically. Additionally, the driver of the Truck will have pre-stamped envelopes for people who want to mail-in donations. In turn, MOWAA will update their volunteers and friends on the Tour by posting the Truck’s schedule and photos from the road on their Facebook page and website, and in their monthly newsletter.

If you are interested in learning more about the organization, please visit www.mowaa.org.

Idahoan Foods
Potato lovers know what they’ll find in any Idahoan package: real Idaho® potatoes, convenient preparation, and authentic homemade taste. All this adds up to happy faces at the dinner table — every time. As we celebrate half a century of delivering delicious potatoes, we recall the countless compliments from satisfied customers who can’t believe our potatoes could be so easy to prepare yet taste so good. Moving forward, consumers will continue to get more timesaving products in a variety of ready-made flavors. So here’s to another 50 years of homemade taste, each and every time.