EAGLE, ID, May 22, 2019 – A sea of showstopping displays from coast to coast made for some tough judging in the 2019 Idaho® Potato Lover’s Retail Display Contest, which gave out more than $150,000 in cash and prizes.

“We had so many wonderful entries this year for both large and small displays,” says IPC Marketing Manager Jamie Bowen. “It’s always difficult to pick winners, but this year was especially challenging. We love it that so many retailers are creating such imaginative Idaho® potato displays, driving sales during what is traditionally a slower time of the year.”

HORMEL® Bacon Toppings was a natural choice to partner with Idaho® potatoes in the display contest, since “52 percent of consumers use bacon toppings on their potatoes,” says HORMEL® Bacon Toppings Brand Manager Corrine Hjelmen. “It’s our fifth year doing the contest, and we are excited about planning the sixth.”

Produce shoppers made it their goal to see the football-themed Idaho® Potato Bowl display at Buehler’s River Styx in Medina, Ohio, which won 1st place for the 10+ registers category. Tammy Raber, Produce Manager for the store, has received honorable mentions in the IPC contest for many years, so she was especially delighted to capture the top prize for 2019.

“We’ve done some neat things with the displays over the years, and it’s one of my favorite parts of the job,” she says. “Potato sales always go up during [Idaho Potato® Lover’s Month], and we sell a lot of 10-pounders then.” 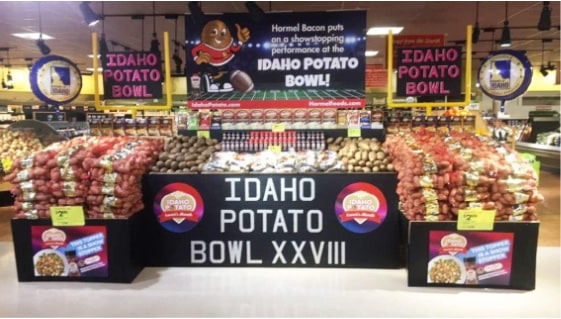 Tammy Raber, Produce Manager, Buehler’s River Styx, Medina, Ohio: “Every year we do the Idaho®potato display, and our customers really like it.”

At Broulim’s in Shelley, Idaho, a HORMEL® Bacon Toppings character stole the show surrounded by rows of enthusiastic Idaho® spuds, hand painted by the store’s cake decorator. The artwork-filled display, which took 1st prize among stores with 6-9 registers, was a big hit with shoppers too, says Produce Manager Jackie Hanson.

“When I would be out on the floor, it wasn’t uncommon to hear kids say ‘Look, Mom, it’s the theater,’ or someone saying ‘Isn’t that cute?’ about the display,” she says. 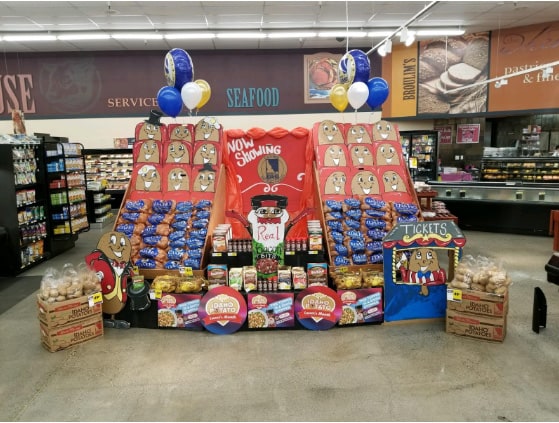 Jackie Hanson, Produce Manager, Broulim’s, Shelley, Idaho: “The potato sales were quite a bit higher than they would have been if I had not had the display up.”

The local farming and Amish communities helped inspire the country-themed backdrop for Versailles IGA’s 1st prize display in the 1-5 registers competition. The elaborate display was truly a team effort from the produce department at the Versailles, Indiana, store, says Produce Manager Bill McRoberts. “We really enjoy doing it, and we sold a lot of Idaho's when it was up,” he adds. 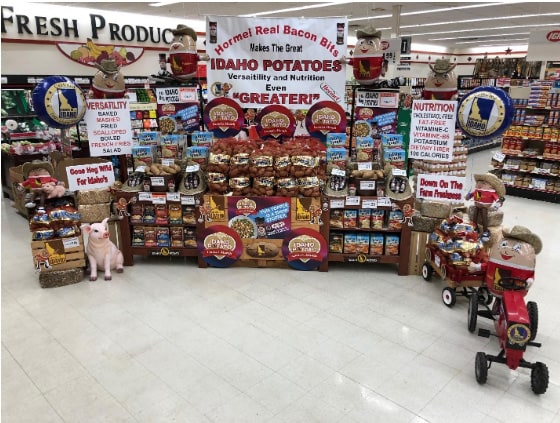 Bill McRoberts, Produce Manager, Versailles IGA, Versailles, Indiana: “We put a photo of the display on our Facebook page and got all kinds of remarks on it.”

The 2019 retail display contest also included a random sweepstakes drawing for an all-expenses-paid trip for two to the Royal Lahaina Resort on the Hawaiian island of Maui. Robert Olin, Produce Manager of Tops Market in Camillus, New York, was the lucky winner. “I’ve never been to Hawaii, but it was a dream of mine to go someday,” says Olin, who adds that a traditional luau will definitely be on his agenda. The store’s category manager will also receive a Maui trip for two as part of the Category Manager Match Program.

The Category Manager Match Program also awarded equivalent prizes to corporate category managers for stores that qualified for 1st through 5th place prizes. In addition, a free 1.5-liter Toastmaster Air Fryer was sent to everyone who entered.

Each in-store display was required to incorporate clearly marked fresh Idaho® potatoes (bag, bulk or both) with a clear label showing the Idaho name and the “Grown in Idaho®” seal, an Idaho® dehydrated potato product and any variety of HORMEL® Bacon Toppings. The displays also needed to feature IPC special themed point-of-sale materials: double-sided Potato Lover’s Month logo display signs, double-sided signs with appetizing photos, and inflatable Mylar™ IPC-branded balloons. Retailers were required to showcase the display in their store’s produce section for at least one week between Jan. 14 and March 15, 2019.

Established in 1937, the IPC is a state agency responsible for promoting and protecting the famous “Grown in Idaho®” seal, a federally registered certification mark that assures consumers are purchasing genuine, top-quality Idaho® potatoes. Idaho’s growing season of warm days and cool nights, ample mountain-fed irrigation, and rich volcanic soil give Idaho® potatoes their unique texture, taste and dependable performance. These ideal growing conditions are what differentiates them from potatoes grown in other states. For more information, visit www.idahopotato.com.