EAGLE, ID, May 2, 2011 – More retailers than ever before decked their aisles in February with spectacular spud displays.  Their motivation:  The hope of winning their share of the $150,000 in cash and prizes awarded in the Idaho Potato Commission’s (IPC) Potato Lover’s Month (PLM) Retail Display Contest. 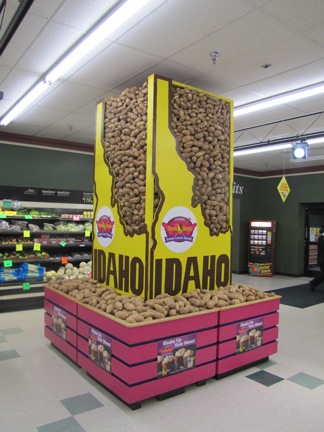 Celebrating its 20th anniversary this year, the Contest is the IPC’s longest-running promotion and has proven to be more popular than ever before, garnering a record of 2,515 entries.  It has inspired innovative potato displays from retailers across the country, helped increase Idaho® potato sales, and bolstered business in produce departments during a month when produce sales are typically at a lull.

“Produce managers across the country understand better than ever the impact a strong, creative retail promotion can have on their entire department; they know from first-hand experience that attention-grabbing displays drive sales,” said Seth Pemsler, Vice President, Retail/International, IPC. “Even after 20 years not only are we generating more interest than ever before, the displays are bigger, bolder and even more creative."

Fresh Market in Spanish Fork, Utah took the challenge to heart and built the World’s Largest Idaho® Potato Display.  It took dozens of dedicated employees five hours to transform 80,000 pounds of Idaho® potatoes (two truckloads) into a “Spud-tacular” display.  A combination of local, advertising and public relations support, in-store activities and competitive pricing guaranteed that every single potato sold!  Click to view a time-lapsed video of the display being built.

The IPC’s Potato Lover’s Month POS materials and Idaho® potato products (both fresh and dehydrated), weren’t the only items featured in the merchandising masterpieces. Competitors were challenged to add a few extra ingredients to the mix, including popular potato toppings Mrs. Dash Seasoning Blends® and Molly McButter®, to cook up some truly unique displays.

Participants submitted their entries online or by mail along with a photo of their display. This year, every qualified entrant received a Coby Snapp® Digital Camcorder, valued at $99.

The Winners…
A total of 115 cash prizes were awarded to the top five finishers in three store categories as well as honorable mentions. Fifteen category managers also received a matching cash prize for their stores placing in the top (1st through 5th) categories.

Shake up your Idaho® potatoes with Molly McButter® and Mrs. Dash Seasonings Blends®.

To view photographs of all the winning entries, visit http://retail.idahopotato.com/plm_2011.


More than 80,000 pounds of Idaho® potatoes were used in this "Spud-tacular" display. 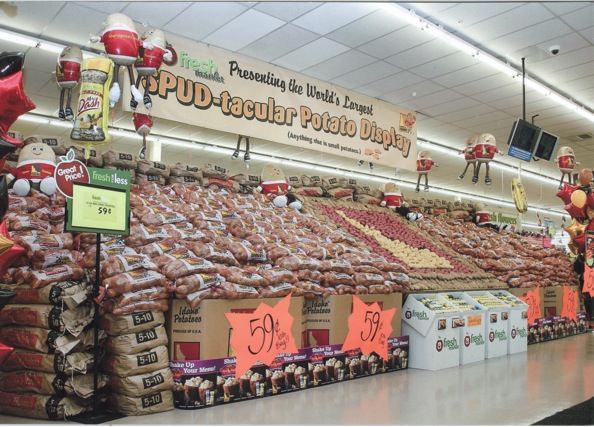 Contest Details
Participating retail supermarket chains and independents had to feature the displays in their store’s produce section for at least one week during the January 31 – February 25, 2011 Contest period.

The Potato Lover’s Month Display Contest Review Committee judged the displays and selected winners based on:
•   Use of PLM signage
•   Creativity
•   Incorporation of partner products
•   Effectiveness of the display in perceived sales increase

About the Idaho Potato Commission
The Idaho Potato Commission is a state agency that is primarily responsible for expanding the markets for Idaho-grown potatoes through advertising, promotion and research. The Commission also protects the use of the "Idaho® potato" and "Grown in Idaho®" seals, which are federally registered Certification Marks that belong to the IPC.  These Marks ensure that consumers are purchasing potatoes that have been grown in the state of Idaho. For more information, visit www.idahopotato.com.
# # #