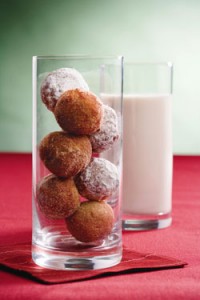 This is an interesting question, not sure if you were joking, but there are some great potato dessert recipes you can try.  The Idaho potato adds a denseness to breads, a creaminess that’s hard to beat, and has even been the subject of a farmer’s dreams to combine his dairy business with potato farming (Reed’s Dairy in Idaho Falls, Idaho makes a delicious assortment of potato ice cream flavors using the dry mashed potatoes along with milk and apple juice to achieve the traditional ice cream texture with less butter fat).  I just saw our proofs for the 2010 chef calendar and Chef Owner Mindy Segal of Hot Chocolate in Chicago developed two potato based desserts…a bacon, chocolate, Idaho potato chip and toffee brittle and an Idaho potato chip butter cookie with a caramel butter cream center.  Last month at a food editor luncheon we were served thinly sliced red thumb variety fingerling potatoes quickly fried and then tossed in cinnamon and sugar.  They were scrumptious.  I once had a reduction of mashed potatoes combined with candied apricots and this marmalade was delicious.  One of the non-potato desserts that was a tradition for many years in Boise is still served at banquet and catering events as well as at the West Side Drive Inn in Boise.  Chef/Owner Lou Aaron molds vanilla ice cream into the shape of a baked potato, quickly rolls it in cocoa powder, and freezes it.  To plate, he starts with a pool of chocolate sauce, places the frozen “potato” on top of the sauce, uses cream frosting in white to pipe on top as an opened potato inside, uses green candy sprinkles as chives, etc.  This creates quite the stir with visiting guests who can’t believe they are eating potatoes for breakfast, lunch, dinner and now dessert.  So, expand your horizons and take the initiative to create a unique dessert you can talk about to your guests…Idaho potatoes.

Here are a few inspirations to get you started!