With 785 posts, chances are there's already an answer to your question. Please try searching below before submitting a question to Dr. Potato. Use multiple words to help narrow down the results. For example, search for "potatoes" and "group" if looking for an answer on cooking potatoes for large groups.

The Difference Between Idaho® Potatoes And Russet

What is the difference between Idaho® potatoes and russets? 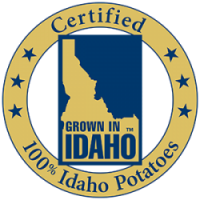 “Idaho® potato” and the “Grown in Idaho®” seal are federally registered Certification Marks that belong to the Idaho Potato Commission (IPC). These Marks ensure that consumers are purchasing potatoes that have been grown in the state of Idaho.

The IPC works hard to protect these trademarks and ultimately the integrity of the ‘”Idaho® potato” brand, which is recognized around the world as a premium potato. In fact, recently a trial was held in the U. S. District Court for the Southern District of New York where a jury concluded, and a Judge affirmed, that “Idaho” was not generic for any russet potato.

While the russet is the most well-known potato grown in Idaho, more than 25 other potato varieties are grown in Idaho including: Yukon Golds, Reds and Fingerlings.