How can I tell when my baked potatoes are done?

Sometimes at home I fix a single baked potato for dinner, sometimes for the family I bake 4-5 at a time. How can I easily tell when they are done?

When baking an Idaho® russet potato, rely on your senses AND a meat thermometer.

I can usually smell the aroma of a fully baked potato, or one that only has a few minutes to go as the steam escapes the vent in the oven. I can grab the potato out of the oven with a mitt, and use my hands to hold it while I poke a fork into the middle of the largest part of the potato, it should pierce the center easily with little resistance and come out dry rather than moist. Visually, the skin should have dried out just enough to have a crispy texture.

Ovens vary in temperature, even when the dial says one thing the oven cavity may be hotter or cooler. I usually start out baking a potato right on the rack, for best air circulation. Placing it on a sheet pan or baking pan works too, especially when you have several potatoes baking at once. But know that the pan has to heat up before the bottom of the potato starts to bake. For temperatures, I find a hotter oven set at 500 degrees F is too warm, it over cooks the outside before the inside is done and usually results in a tough outer skin, sometimes dark brown right under the skin, especially on the bottom area. Idaho® russet potatoes average about 20% solids or starch, the Russet Burbank and Ranger a little higher. The rest is water, so baking at too low a temp (which you might need to do if baking with a chicken dish at 325 degrees F for example) just means a longer bake time. One method is to microwave the potato till partially done, then add to the oven with the chicken dish to get both to cook in about the same time. Roasting cut up potatoes is a way around this, as the potatoes will cook much faster if cut into 1 1/2 to 2 inch chunks.

The ideal temperatures to bake a potato are between 375 to 400 degrees F (I like a drier inside, so I personally prefer to stick with the 400 degree setting) for about an hour. A conventional oven may take ten to fifteen minutes longer to bake a russet potato than a convection oven. Using a meat thermometer, placed into the thickest part of the potato in the center, it is fully cooked at 210 degrees F. Now, you’re cooking! 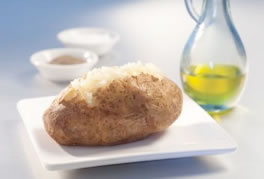