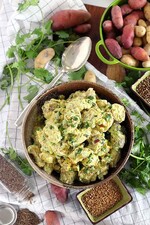 Even though Buddhist monks were starting to cultivate potatoes at their monasteries in Nepal and neighboring Bhutan in the 1700s, potatoes never really caught on until almost 150 years later, when the government of Nepal stepped in with some support from the Indian government. Now a staple all across Nepal, the tuber makes its way into every home daily.

Chukauni, a yogurt-based potato salad from the hilly region of Palpa in midwestern Nepal, is a favorite of Suraj Pradhan, a young chef who lived in nearby Chittawan for twenty-three years with his mother and brother. The food business ran through his veins as he became involved at a young age helping his maternal uncle and aunt in the family’s restaurant. His path led to Sydney, Australia, where a desire to keep Nepali cuisine alive now drives his passion as he makes every attempt to weave in his childhood flavors at his place of work and other venues. He keeps coming back to this salad—creamy with yogurt, assertive with pickling spices such as fenugreek and mustard oil, comforting in taste, slightly bitter, and with a hint of heat from the cayenne. The cooling yogurt makes it possible for this salad to be a summer favorite, a steadfast accompaniment to picnics, family gatherings, and quick office lunches. - Raghavan Iyer

Elizabeth made this recipe for us as part of a Cook the Book campaign for Smashed, Mashed, Boiled and Baked by Raghavan Iyer. You can read her full post here.

1. Scrub the potatoes under cold running water and cut them into 1-inch pieces. Place them in a small or medium-size saucepan and cover them with cold water. Bring to a boil over medium-high heat. Lower the heat to medium-low, partially cover the pan, and gently boil until the potatoes are tender when pierced with a fork or knife but still firm, 10 to 12 minutes. Fish the pieces out of the water with a slotted spoon and place them in a medium-size bowl.

2. Drop the peas into the potato cooking water and boil them just to warm them up, 1 to 2 minutes. Drain them in a colander, give them a good shake or two to remove any excess water, and add the peas to the potatoes along with the onion.

3. Heat the oil in a small skillet over medium-high heat. Once the oil appears to shimmer and smells quite pungent, sprinkle in the coriander, cumin, and fenugreek seeds. Allow them to sizzle and turn reddish brown, about 1 minute. Remove the pan from the heat and sprinkle in the cayenne and turmeric, staining the oil with their sunny dispositions. Pour most of the oil out over the potatoes and peas, holding back the seeds in the skillet as much as you can. Scrape these seeds into a mortar and pulverize them into a coarse powder with a pestle. Or if you don’t have one, transfer them to a spice grinder (like a coffee grinder) and grind them. Scrape this blend into the bowl with the potatoes.

4. Add the yogurt, cilantro, and salt to the potatoes and give it all a good stir. Serve at room temperature.