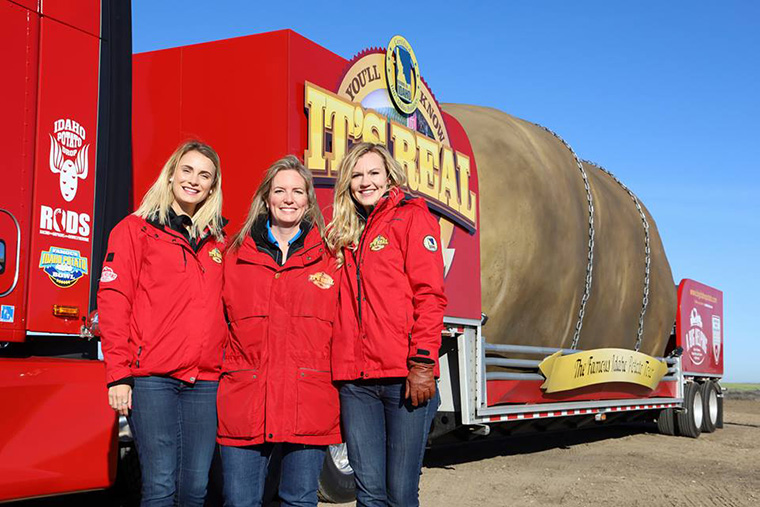 Eagle, Idaho, August 1, 2019 – For eight years, the Big Idaho® Potato Truck, a 4-ton spud on wheels, has been turning heads and stopping folks in their tracks everywhere it goes. This summer, there’s another reason why people are taking a second look at the oversized vegetable. The Tater Team, the trio that travels with the Truck promoting famous Idaho® potatoes, is all women, including the driver. According to CNBC, only 6 percent of all truck drivers are female. So if you think a giant spud is a rare sighting, so is a female truck driver.

This year marks Melissa Bradford’s first year driving the Big Idaho® Potato Truck, and she’s a natural. Born and raised in Idaho, Melissa grew up harvesting spuds with her dad. She became a commercial truck driver in 2008, and in 2016 upgraded to a Class A commercial license, allowing her to operate a vehicle with a gross combination weight rating of 26,001 pounds. Melissa says seeing people’s reaction to the Truck is the highlight of her job, and she’s amazed at how many people ask her if the potato is real. Melissa is also a spokesmodel for the Duluth Trading Company.

Accompanying her are the “Tater Twins,” Jessica Coulthard and Kaylee Wells, Idahoans and best friends who have been traveling with the Big Idaho® Potato Truck for three years. They’ve trekked across the country countless times promoting the health benefits of Idaho® potatoes to millions of folks who are thrilled to see the largest spud on wheels. “The Tater Team represents the heart and soul of the Idaho® potato brand, and I’m exceptionally proud of Melissa, Kaylee, and Jessica for demonstrating its values on a daily basis,” says Frank Muir, President & CEO of the Idaho Potato Commission (IPC).

This summer, the trio will travel approximately 25,000 miles and visit about 60 cities. Some highlights of the 2019 tour include participation in the World’s Shortest St. Patrick’s Day Parade in Hot Springs, Arkansas; a zip around the Indianapolis Speedway track; a stop at the World’s Largest Ketchup Bottle in Collinsville, Illinois; and its annual and highly anticipated appearance at the Memorial Day Parade in Washington, D.C. In many of the markets it visits, the Truck supports local charities through its “A Big Helping” program by helping them raise funds and awareness based on their specific needs. The Truck’s complete tour schedule is available at bigidahopotato.com.

The Idaho® potato brand has a long legacy of trailblazing women, and the Tater Trio aren’t the first women to represent Idaho® potatoes. In 2013, the IPC shattered the glass ceiling with the appointment of the first female Commissioner, Peggy Arnzen, a shipper from Benchmark Potato in Rexburg. The first female grower, Mary Hasenoehrl of Gross Farms in Lewiston, was appointed to the IPC in 2017. As industry leaders for many years, both Peggy and Mary have long and impressive backgrounds in farming and agriculture. Their perspective and experience have contributed to building impactful marketing programs designed to reach the IPC’s primary target audience, women ages 25-54.