Thousands of PMA attendees couldn't resist the IPC booth appeal of larger-than-life superheroes in 7-foot-tall costumes next to their real-life counterparts, the IPC field representatives. IPC retail promotion directors Bill Savilonis, Ken Tubman, Larry Whiteside and Kent Beesley have been immortalized in the award-winning IPC retail promotion campaign as bobblehead keepsakes and star as cartoon superheroes in both print and online ads and a custom comic book. 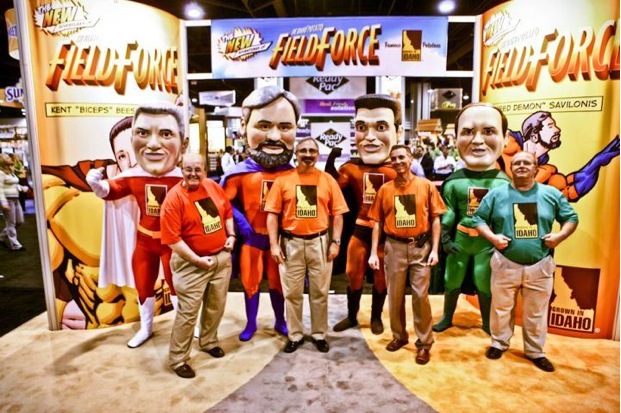 "At least a few thousand people had their pictures taken with the superheroes, and many, many more stopped by the IPC booth to see them," said Seth Pemsler, vice president, Retail/International, IPC. "There was a tremendous amount of buzz about the IPC booth at the show. It was a unique, highly successful way to get everyone talking about Idaho® potatoes."

Retail customers stopped by the Idaho Potato Commission booth to pose with the larger-than-life superheroes. 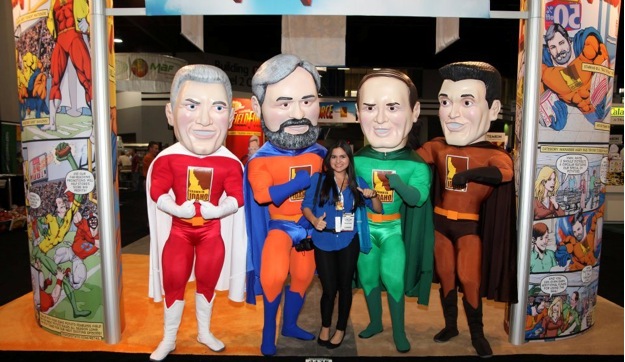 The superhero costume heads and suits, which were worn by local actors, were designed by EvansHardy+Young Inc. and manufactured by Scollon Productions Inc., one of the world's premier costume character companies. Each costume head was painted and colored by hand to look like one of the four IPC field representatives, and the IPC logo was silk-screened directly onto the custom spandex suits.

The real-life IPC field representatives didn't know their alter egos would be manning the booth alongside them until they walked onto the show floor the first day, Pemsler said. "It was a big surprise, but they were absolutely thrilled when they saw the giant superhero versions of themselves. People would come into the booth and get a picture taken with the retail guy himself, and then with the superhero character as well."

Idaho® potatoes and bananas...who would have thought? 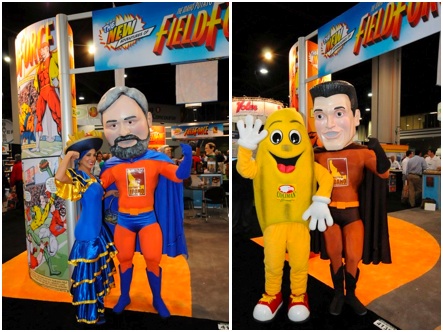 IPC booth workers handed out business-size cards to direct attendees to the Idaho Potato Facebook page, www.facebook.com/famousidahopotatoes, where they could find and download their pictures.

"I posted the picture on my Facebook wall, and since then I've received many comments and compliments from family and friends," said Dan McGrath, Sales and Marketing, Freska Produce Inc., Oxnard, Calif. "My response is always, 'Those guys from the Idaho Potato Commission do something fun every year.'"

About the Idaho Potato Commission
The Idaho Potato Commission is a state agency that is primarily responsible for expanding the markets for Idaho-grown potatoes through advertising, promotion and research. The Commission also protects the use of the "Idaho® potato" and "Grown in Idaho®” seals, which are federally registered Certification Marks that belong to the IPC. These Marks ensure that consumers are purchasing potatoes that have been grown in the state of Idaho. For more information, visit www.idahopotato.com.