EAGLE, Idaho, September 10, 2012—The Idaho Potato Commission (IPC) is kicking off the 2012 harvest with a new television commercial featuring the Great Big Idaho® Potato Truck and a real Idaho® potato farmer. The humorous spot made its debut on ESPN during Boise State University’s (BSU) first game of the year against Michigan State University on August 31. 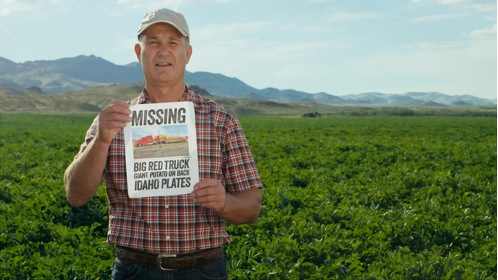 “With an abundant harvest, a promising football season for our fantastic Idaho teams and an array of exciting initiatives planned, we’re eager to start the year with a fresh and funny commercial that’s different from anything we’ve produced in the past,” said Frank Muir, President & CEO, IPC. “This spot stars one of our own growers and captures the amazing time we’ve had taking the Great Big Idaho® Potato Truck on tour across America… as well as the enthusiasm of millions of potato fans who have had a chance to see the Truck and meet the Tater Team, our incredibly outgoing crew that travels with the Truck.”

The commercial begins with Idaho® potato farmer Mark Coombs, standing in his family-owned field in Caldwell, Idaho, sincerely requesting help in finding the Great Big Idaho® Potato Truck that left Idaho months ago on a cross-country tour to celebrate the IPC’s 75th anniversary. During Coombs’ narration, shots from the Truck’s tour, which include the six-ton spud speeding past skyscrapers, traversing busy highways and entertaining cheering fans, make it clear that the team traveling with the Truck and everyone who encounters the world’s largest potato on wheels are thoroughly enjoying it! Two versions of the commercial will air — one highlights the Truck’s journey and the other focuses on the fun-loving Tater Team. 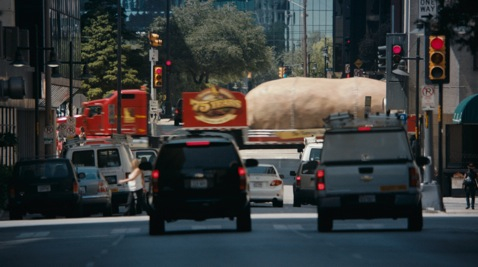 Launching a new commercial every year to kick off the harvest season has become an anticipated and exciting tradition for the IPC. The 2012 Idaho® potato harvest is well underway and more than 12 billion pounds of potatoes are expected to be harvested.

The commercial will begin airing nationally on popular cable stations like CNN, Fox News, Food Network, HGTV, and Headline News at the end of October and will run through early 2013.

The IPC will continue to work with its longtime spokesperson, fitness guru Denise Austin. As she has done for the past nine years, Denise will remind consumers of the importance of eating a balanced diet that includes nutrient-dense, carbohydrate-rich foods like Idaho® potatoes.

Mark Coombs, a native of Caldwell, Idaho, has been growing potatoes, corn and wheat for the past 26 years. He served as an Idaho Potato Commissioner for seven years and is deeply involved in other industry organizations that are all dedicated to growing the best potatoes in the world.

For more information on the Great Big Idaho® Potato Truck and its cross-country tour, visit www.bigidahopotato.com.

About the Idaho Potato Commission
Established in 1937, the Idaho Potato Commission (IPC) is a state agency that is responsible for promoting and protecting the famous “Grown in Idaho®” seal, a federally registered trademark that assures consumers they are purchasing genuine, top-quality Idaho® potatoes. Idaho's ideal growing conditions, including rich, volcanic soil, climate and irrigation, differentiate Idaho® potatoes from potatoes grown in other states. For more information, visit www.idahopotato.com, like us on Facebook at Facebook.com/famousidahopotatoes or follow us on Twitter at Twitter.com/idahopotato.