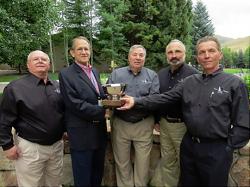 EAGLE, Idaho – What happens when a potato sells itself so well that the poor produce supervisor is left overwhelmed by his or her good fortune?

The “Too Successful” campaign, which ran from September 2014 to August 2015, included 10 different full-page print ads that appeared in retail trade publications such as Produce Business, plus an additional teaser ad. Online banner ads adapted from the print ads also appeared on key trade publication websites during the peak potato buying season, October 2014 to March 2015, to generate additional play for the campaign.

The IPC was among 17 companies in all segments of the industry that were honored by Produce Business in 2015 for their outstanding marketing campaigns based on creativity, originality, execution, significance and call to action.

Other IPC retailer support materials that promote the Idaho® potato brand include Potato Retailing Today, an eight-page quarterly section in Progressive Grocer, along with an exclusive annual Idaho edition of The Produce News, a national television advertising campaign, and innovative bin promotions.