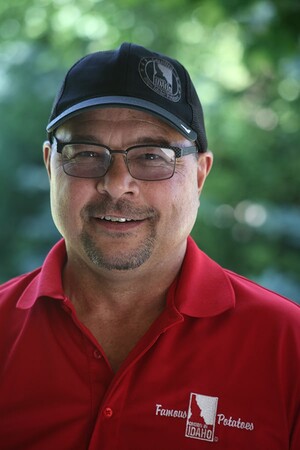 Dan Nakamura is a third generation family member to be involved in the Idaho potato industry. His grandfather started farming in the 1940’s with a small plot of land and couple of trucks. He built his business to over 15,000 acres of farm ground, a fresh potato packing operation and a potato dehydration plant located in Idaho and Nevada. Dan started in the operation in 1988. The family sold the operation in 1999, but Dan continues to be a part of the organization.

Dan Nakamura currently serves as director of raw material procurement and industrial sales for Idahoan Foods in Idaho Falls, ID. He started working in the operation as unit manager for J. R. Simplot Co. in Winnemucca, NV. In 1988, he became the fresh potato operations and sales manager at Winnemucca Farms. He was then promoted to the position of vice president, raw procurement for Winnemucca Farms/US Foods Inc. Dan currently serves on the Idaho Potato Commission and various industry committees. He also served as a member of the Nevada State Board of Agriculture. He holds a Bachelor’s degree in Business Administration from Southern Oregon University.

Dan and his wife, Colette, have been married for 34 years and have two daughters, Nicole and Aimee. In his spare time Dan enjoys coaching softball, volunteering with youth activities and outdoor sports.